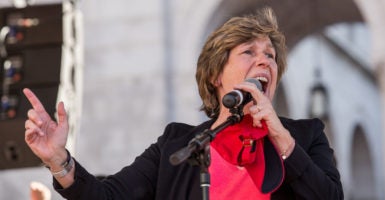 With the support of teachers unions, the Los Angeles Board of Education seeks state approval for a moratorium on charter schools. Pictured: American Federation of Teachers President Randi Weingarten speaks to a crowd of striking teachers in Grand Park on Jan. 22, 2019, in downtown Los Angeles, California. (Photo by Scott Heins/Getty Images)

The Los Angeles Board of Education voted 5-1 on Jan. 29 on a resolution to temporarily halt charter school growth after negotiations were reached with the teachers union.

The resolution seeks state approval of a moratorium on charter schools in Los Angeles Unified School District for eight to 10 months to allow for an impact study on the financial effects charter schools have on traditional public schools. In California, only the state can sanction such a request.

Los Angeles is home to 224 independent charter schools, holding more charter schools than anywhere else in the country. These schools are publicly funded, but privately managed.

While county officials will move forward with urging state officials to pass the moratorium, parents whose children are benefiting from charter schools were reportedly left out of the discussion.

“Recently, the voice of [Los Angeles Unified School District] charter public school students and families was completely disregarded during recent contract negotiations between LAUSD and the United Teachers of Los Angeles (UTLA),” according to a press release by California Charter Schools Association.

After the board approved the resolution, thousands of charter school students, families, and advocates rallied on Jan. 29 at Los Angeles Unified School District headquarters.

“My child attends a charter school, and I know for a fact our neighborhoods need more great public schools like mine, not less,” Roxann Nazario, a parent from Fenton Avenue Charter School, said in a statement. “Until every family that looks like ours is getting the education they deserve, we need charter schools.”

“For parents, the issue isn’t about politics, it is about what their child needs and what learning environment will help them thrive,” Castrejon said in a public statement. “Without a doubt, this charter school ban will unfairly target the most vulnerable students in Los Angeles,” she says.

The vote for the moratorium followed the ratification of a contract between the board and United Teachers Los Angeles, ending a six-day teachers strike.

The contract includes a 6 percent pay raise for public school teachers, a reduction of class sizes, and more hiring of librarians, nurses, and counselors. The agreement also includes “social unionism” commitments, described as “bargaining for the common good” of the broader community.

Though the contract was approved, regulators from the county say they are still assessing the financial feasibility of the negotiations.

Randi Weingarten, president of the American Federation of Teachers of which United Teachers Los Angeles is an affiliate, cited tax caps and the lack of appropriate investment being a challenge for Los Angeles’ traditional public schools. In a press release about the charter school moratorium, she noted that the “unregulated growth” of charter schools siphoned funds for traditional schools, which led to the teachers strike.