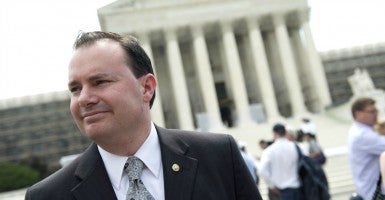 In anticipation of the Supreme Court’s impending decision on the gay marriage case, Sen. Mike Lee is attempting to protect religious non-profits by passing legislation that would prohibit the federal government from “discriminating” against faith-based institutions.

“Discrimination by private parties against private parties—that’s one issue,” Lee told a small group of reporters today in a phone conference. “There is a different issue when the government is itself the discriminator … that’s a problem and that’s what we’re trying to protect here.”

>>> Related: Emails Raise Questions of Bias in Case Against Bakers Who Denied Service for Same-Sex Wedding

To address the concern that religious institutions may lose their tax-exempt status if the Supreme Court rules in favor of same-sex marriage later this month, the Utah Republican plans to introduce legislation next week that would ban that from happening.

Lee said his bill, which has not yet been released, mirrors legislation he introduced in 2013, called the Marriage and Religious Freedom Act.

“We’ve made some tweaks with the wording here or there, but the overall effect of it is basically the same,” he said.

The 2013 Marriage and Religious Freedom Act prohibits the federal government from taking “an adverse action against a person,” when they act on a religious belief that marriage is the union of one man and one woman.

In light of the Supreme Court’s gay marriage case, Lee says the issue poses a real “threat” to religious institutions.

“These threats tend to emerge most when government expands its footprint,” Lee said. “We need to draw lines around the power of government.”

>>> Related: Bobby Jindal on Religious Liberty: ‘Don’t Waste Your Time Trying to Bully Me in Louisiana’

An example of this “threat” to religious freedom would be the Internal Revenue Services revoking a religious school’s tax-exempt status or denying them federal grants for refusing to hire an employee who supports same-sex marriage.

During oral arguments for the same-sex marriage case, Justice Samuel Alito raised the concern to U.S. Solicitor General Donald Verrilli, who was arguing on behalf of the Obama administration in favor of same-sex marriage.

Verrilli admitted religious schools that do not accept a new definition of marriage would “certainly” be in danger of losing their tax-exempt non-profit status.

Keith Wiebe, who represents the American Association of Christian Schools, which is a national education association of “800-plus schools” and “100,000 students,” found the exchange “very chilling.”

“We strongly believe and teach that marriage is between one man and one woman,” Wiebe said. “These beliefs require the freedom to hire as we choose based on these beliefs.”