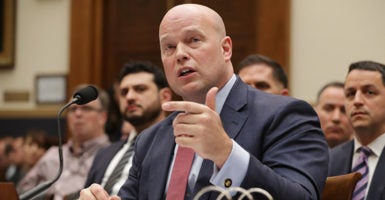 Acting Attorney General Matthew Whitaker doesn’t expect to remain in the job for more than another week, as the Senate is expected to confirm nominee William Barr for the position.

Whitaker has been in the office long enough, however, to be sharply grilled by Democrats—and a pair of Republicans—at a House Judiciary Committee hearing Friday.

Here are eight takeaways from the contentious Capitol Hill hearing.

1. No Interference With Mueller Probe

The majority of the hearing dealt with special counsel Robert Mueller’s probe into purported Russian interference in the 2016 presidential election and whether Donald Trump’s campaign colluded in that.

Early in the hearing, Whitaker affirmed to the committee: “I have not talked to the president of the United States about the special counsel investigation.”

He said he has followed the special counsel rules to the letter and didn’t discuss it with others outside of the Justice Department.

“I do not believe that I have briefed third-party individuals outside of the Department of Justice,” Whitaker said. “I’ve received the briefings myself, and I’m usually the endpoint at that information.”

Rep. Steve Cohen, D-Tenn., tried to draw a distinction between Whitaker and Trump, who has called Mueller’s Russia probe “a witch hunt.”

“Would you say the special counsel’s investigation is a witch hunt?” Cohen asked.

“Congressman, it would be inappropriate for me to talk about an ongoing investigation,” Whitaker said, a point he would make throughout the hearing.

Shortly after his opening statement, Whitaker violated what House members regard as general decorum with the Judiciary Committee chairman, Rep. Jerry Nadler, D-N.Y.

“In your capacity as acting attorney general, have you ever been asked to approve any request for action to be taken by the special counsel?” Nadler asked, after his first five-minute round of questioning had expired.

Whitaker responded: “Mr. Chairman, I see that your five minutes is up. I’m here voluntarily. I agreed to five-minute rounds.”

Whitaker subsequently answered: “There’s been no event, no decision that has required me to take any action, and I’ve not interfered in any way with the special counsel’s investigation.”

A day earlier, Nadler and Whitaker had a standoff about whether Whitaker would be subpoenaed, when he was already voluntarily coming to testify at an oversight hearing on the Justice Department.

“I also must make clear that I will continue the long-standing executive branch policy and practice of not disclosing information that may be subject to executive privilege,” the acting attorney general told the committee.

Nadler appeared to threat to call Whitaker back before the committee when the acting attorney general becomes a private citizen again after Barr is confirmed.

“Your failure to respond fully to our questions here today in no way limits the ability of the House Judiciary [Committee] to get the answers in the long run—even if you are a private citizen when we finally learn the truth,” Nadler said.

The New York Democrat subsequently said votes were being called on the floor of the House. Members have 15 minutes to cast their votes, so he recessed the committee, at which point Whitaker joked, “Is the 15-minute rule changed now?”

After his opening remarks at the hearing, the committee’s ranking member, Rep. Doug Collins, R-Ga., motioned for the committee to adjourn, asserting the majority was “chasing rabbits” and playing a “hide-and-seek game.”

“This is nothing more than a character assassination,” Collins said in his opening remarks.

Collins asked how it was that CNN was present and waiting for the FBI to arrive when more than two dozen agents showed up to arrest Roger Stone at his home in a pre-dawn raid.

Stone is a strong supporter and confidant of Trump who was charged with lying to Congress.

Whitaker said it was “deeply concerning” that CNN appeared to have known ahead of time, but said he had no evidence that someone on the Mueller team or within the Justice Department had tipped the network off.

“I share your concern with the possibility that a media outlet was tipped off to Mr. Stone’s either indictment or arrest before it was made,” Whitaker said.

Whitaker seemed to express frustration that neither side wanted to go beyond headline-grabbing topics into important matters that affect Americans.

“I think it’s important, as we sit here today, that we understand this is not a confirmation hearing, that I am probably going to be replaced by Bill Barr in the next week,” Whitaker said.

This is an oversight hearing for the Department of Justice, and I am surprised, as we both had the chairman and the ranking member talk about what they want to talk about, that we haven’t talked any about anything about the work regarding violent crime.

It is your five minutes, and you can ask the questions that are of most interest to you. But, as I sit here today, I would like to talk about the incredible work that we have been doing at the Department of Justice since I was chief of staff and now acting attorney general.

Collins responded that the news coverage on Thursday ahead of the hearing should have tipped Whitaker off that the hearing wasn’t going to be substantive.

“I appreciate that, but if you had been glued to a TV yesterday morning, you would have found out that’s not what this is going to be about,” Collins said.

Rep. Jim Jordan, R-Ohio, appeared at times to question the acting attorney general as aggressively as Democrats. He wanted to know about the broad mandate Mueller had to investigate matters that might fall outside of the purview of the Russia probe.

“In my experience, it’s consistent with other appointments of special counsels,” Whitaker responded.

Jordan talked about a three-page memo from Deputy Attorney General Rod Rosenstein to Mueller, 70 percent of which was redacted, explaining the scope of his investigation.

“Do you know what kind of redactions, Mr. Whitaker?” Jordan asked.

“Are there names in the redactions?” Jordan asked. “Did Rod Rosenstein give the special counsel authority to investigate specific Americans?”

Whitaker answered as he responded to Democrats’ questions: “This is an ongoing investigation. I spoke to you generally about investigations.”

“We investigate crimes and not individuals,” he said.

In response to a question from Collins, Whitaker said he couldn’t respond to a “human resources matter.”

She pointed to the 2003 federal ban on partial-birth abortions.

“Following New York Gov. Cuomo’s support of abortion up to the moment of birth, and Gov. [Ralph] Northam of Virginia’s comments indicating support of an action, which in my opinion, relates to infanticide,” Lesko said, “are you concerned that some of these actions of late implicate the federal partial-birth abortion act that criminalizes gruesome procedures? This is violent. Has [the Justice Department] looked into this?”

Whitaker said, “As an American citizen, I am very concerned.”

Lesko said she read a Wall Street Journal article from 2018 that reported that in New York City, thousands more black babies are aborted than are born alive each year.

“My grandkids are African-American,” Lesko said. “So, if there was a crime occurring in this country that exceeded the number of deaths from cancer, AIDS, heart disease, accidents combined, which abortions does—is that something the [Justice Department] would get involved in and be concerned about?”

“Every life is valuable. I can’t weigh into the political issue that you raised. The members of this committee have a lot of power as to how they value life, and how we enforce the laws of the Department of Justice,” he said.

This is an issue that I know there is a lot of passion about. I appreciate your passion. It’s something we share together.

If you look at my statements, previous to joining the Department of Justice, especially during my 2014 campaign for the United States Senate, I was very outspoken in this regard.

But as I sit here as acting attorney general, it would be inappropriate for me to comment more forcefully on this issue. But we are going to enforce the laws that Congress passes, and we are going to hold those accountable that violate the law.

8. Speech at Heritage During Shutdown

Rep. Greg Stanton, D-Ariz., pressed Whitaker as to why he gave a speech at The Heritage Foundation during the recently ended partial federal government shutdown.

“It seems appropriate then that the department did issue a memorandum that said during the time of the shutdown, the ancillary functions of the department that involved travel would be not allowed,” Stanton said.

Whitaker said that’s what he understood.

Stanton then asked, “On Jan. 13, 2019, in the middle of the government shutdown, did you travel to give a speech to The Heritage Foundation?”

Whitaker responded, “Travel? I’m not sure what you mean. I went to Capitol Hill to give a speech to The Heritage Foundation, yes.”

Stanton pressed, “Would you consider that speech at The Heritage Foundation to be an ancillary function of the department?”

Whitaker answered, “Congressman, I had no other way to get to a speech that I had committed to give before the shutdown.”