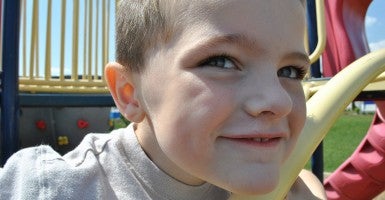 Florida will enable parents of children with disabilities such as Down syndrome, Cerebral Palsy and Autism to completely customize their education. (Photo: Lance Neilson/Flickr)

Erika Hartley has two sons with Autism, which means she can explain in one sentence what being able to customize their education means to her family.

Fortunately, for her sons, Hunter, 11, and Jackson, 7, they live in Arizona, home to the first-in-the-nation education savings accounts. ESAs enable Hunter and Jackson attend Pieceful Solutions, a school that specializes in teaching children with special needs. The Hartleys can use any money left over after tuition for private tutoring, books, educational therapies and to pay for other education-related services and products.

Now, some families in Florida will have access to this innovative approach to school choice. On Friday, Gov. Rick Scott made Florida the second state to establish education savings accounts, signing into law Personal Learning Scholarship Accounts, which will enable parents of children with disabilities such as Down syndrome, Cerebral Palsy and Autism to completely customize their education. Qualifying families can access 90 percent of the funding that would have been spent by the state on their child in a traditional public school—an average of $9,000 per year in Florida’s PLSAs to, as in Arizona, direct funding to a variety of options, including private school tuition, educational therapy and other services that enable them to completely tailor their child’s educational experience.

States such as Arizona and Florida are establishing ESAs because of the flexibility of the accounts. Families are able to roll over unused funds from year-to-year and can roll funding into a college savings account. With college tuition now averaging more than $30,000 per year at private institutions, the answer to the college cost problem could lie in part with these pioneering K-12 savings accounts.

In addition to establishing Personal Learning Accounts, Florida also expanded access to its tuition tax credit program, already the largest in the country.

The tuition tax credit program enables businesses to receive dollar-for-dollar tax credits for contributions to scholarship-granting organizations, which, in turn, provide vouchers to children from low-income families to attend a private school of their choice. Last week Florida expanded access to tuition tax credit scholarships to children from families earning up to $62,000 per year. It also removes the requirement that children attend a public school the year before.

More than 67,000 students in Florida will benefit from the tuition tax credit this fall, a number that is sure to grow thanks to last week’s expansion. The Sunshine State has seen tremendous gains in academic outcomes over the past decade as a result of the array of education reforms that have been in place, including a multitude of school choice options. Overall student achievement has increased, and gaps between white and minority children have narrowed. As education researcher Matthew Lander wrote:

“…this is what a good case achievement gap closing looks like. White scores have improved while the catastrophically low 1998 scores for minority students have improved faster. In 1998, a white student was more than four times as likely to score proficient than a black student, and almost twice as likely as a Hispanic student. By 2013, those ratios had improved despite the fact that white proficiency rates went up themselves.”

School choice options geared toward meeting the needs of children with disabilities have been particularly powerful. As researcher Stuart Buck and University of Arkansas professor Jay Greene wrote, “Students placed in private schools are more likely to be autistic, have multiple disabilities or suffer from emotional disturbances than those students who receive services in the public schools.” The authors, writing in the professional journal EducationNext, explain of participants in Florida’s McKay voucher program that:

“These families were more likely to get what they needed from private schools, even though they had no legal rights to specific services from those schools; they were less likely to get what they needed from the public schools, where they were legally entitled to those services. Market power can sometimes deliver better results than procedural rights. With special education vouchers, families get both: the right to an appropriate education from public schools and the option to purchase that appropriate education from private schools.”

Florida has long been a leader in school choice, funding students and allowing dollars to follow them to schools that meet their unique learning needs and establishing one of the nation’s largest statewide online high schools. Florida’s version of ESAs will empower parents with a whole new level of education customization and continue the school choice march in a big way.