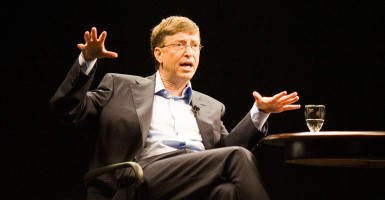 Even Bill Gates is starting to have second thoughts about the consequences associated with Common Core.

On Tuesday, the Bill and Melinda Gates Foundation— the second-largest financial backer of Common Core after the federal government— issued a letter calling for a two-year delay of the full implementation of Common Core, which is set to take effect this 2014-15 school year.

In the letter, Vicki Phillips, the director of education for the Gates Foundation, writes:

“[The] Gates Foundation agrees with those who’ve decided that assessment results should not be taken into account in high-stakes decisions on teacher evaluation or student promotion for the next two years, during this transition [into Common Core]…. It’s valuable for students to take the Common Core-aligned tests without consequences during this period, so that teachers can get familiar with the tests, have a chance to offer their feedback, and get a feel for the students’ successes and challenges.”

The Gates Foundation has financed and promoted Common Core from day one. As the Washington Post’s Lyndsey Layton points out, “The Bill and Melinda Gates Foundation didn’t just bankroll the development of what became known as the Common Core State Standards. With more than $200 million, the foundation also built political support across the country, persuading state governments to make systemic and costly changes.”

But the hasty roll-out of Common Core has given even its staunchest proponents pause.

Although Gates and the teachers unions are not opposed to national standards, their pushback against the stakes associated with the Common Core national tests reveals the natural result of such centralization: it further distances the most important stakeholders—parents and teachers— from the educational decision-making process.

“Supporters say states, districts and individual schools would be free to surpass the national standards, just not fall below them. But testing would constrain what was taught and when…. States would be penalized with lower scores on the national test if they taught subjects at a different time and in a different manner than what Common Core requires.”

Children are unique, with unique learning needs. It’s why one size does not fit all in education.

A moratorium will do nothing to solve the problem of teacher-preparedness with Common Core. The problem lies with the push for centralized educational standards.

But there is good news. Opposition to this centralization of education continues to mount as the consequences of adopting Common Core become more evident. To date, 17 states have either withdrawn from the testing consortia or paused implementation—including three that have exited Common Core fully.