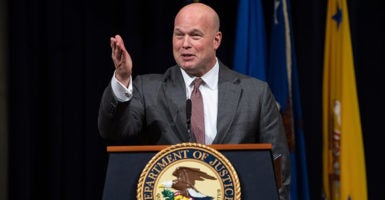 Acting U.S. Attorney General Matthew Whitaker speaks at an event at the Department of Justice on Nov. 15. He cited the department's work on behalf of religious freedom in remarks Wednesday at The Heritage Foundation. (Photo: Nicholas Kamm/AFP/Getty Images)

In 1993, President Bill Clinton, a Democrat, signed broad consensus legislation to protect religious liberty, with support from religious conservative groups and the American Civil Liberties Union alike, which helped it sail through Congress.

Whitaker expressed regret about the shift by Democrats.

“Today, many of [the Religious Freedom Restoration Act’s] original supporters, including the ACLU, have changed their mind,” he said in remarks at The Heritage Foundation.

“In recent years, when some states have attempted to pass their own version of [the Religious Freedom Restoration Act], they have been met with bitterness and hostility,” Whitaker said. “Meanwhile, others have disregarded both the spirit and the letter of [the law]. They have tried to use the power of the state to make people choose between following their core beliefs and being ‘good citizens’ even when it is not remotely necessary.”

The 1993 Religious Freedom Restoration Act, sponsored by then-Rep. Charles Schumer, D-N.Y., cleared the House unanimously and passed the Senate 97-3, when both chambers were controlled by Democrats. It took effect in November of that year.

The law states the federal government can’t burden an individual’s exercise of religion unless it is in seeking to further a compelling public interest, and even then must do so by the least restrictive means.

Whitaker cited cases where the federal government tried to force nuns to provide contraception and of the Supreme Court ruling in favor of a Colorado baker penalized by that state for refusing to design a wedding cake for a same-sex couple.

He also noted that Democratic senators have attacked President Donald Trump’s nominees for their religious views.

Under the Religious Freedom Restoration Act, “religious freedom is not absolute, but is protected by the highest standards under constitutional law,” Whitaker said.  “Government is still able to fulfill its purposes, just without infringing on other people’s rights. It is a remarkable thing for a government to impose such a restraint on itself, and it is unique to the American system.”

Clinton signed the bill in a White House ceremony that had the backing of both religious conservatives and the ACLU.

“It would have been much easier for a government to disregard the cost upon individual liberty and conscience,” Whitaker said. “In all too many countries … that’s exactly what governments are currently doing. But the enactment of [the Religious Freedom Restoration Act] was a bold affirmation that religious freedom and the freedom of conscience are precious and deserving of protection—even if it makes things a little harder for the government.”

Whitaker noted the efforts the Trump administration has made to defend the first freedom of the First Amendment.

Further, the administration defended parents in Montana who claim that the state barred their children from a private school scholarship program because they attend a religiously affiliated school.

The administration filed five amicus briefs in cases alleging religious discrimination in local zoning laws that included cases on behalf of a Hindu temple and a Catholic church, Whitaker noted. The administration is also defending the constitutionality of a World War I memorial in the shape of a cross in Maryland.

Those are among the issues that Whitaker said he has worked closely on, first as chief of staff for then-Attorney General Jeff Sessions and then as acting attorney general.

“Religious liberty and the rule of law are two subjects that [Attorney General] Sessions felt passionate about,” Whitaker told The Daily Signal in an interview after his remarks. “When I came in, I personally drove some of these cases to conclusion.”

If you notice, some of these cases were resolved in October and November, and it’s because I came in and knew how important these were, and really drove them to conclusion. I feel really strongly about this.

I take great pride [in], and very seriously, our obligations under [the Religious Freedom Restoration Act] and protecting all people of faith from undue burdens of the federal government. I hope it continues under Attorney General [nominee William] Barr, and I expect it will.

Congress took up the Religious Freedom Restoration Act legislation after the 1990 Supreme Court ruling in the case of Employment Division v. Smith seemed to be overly broad in addressing a lawsuit by an employee fired for ingesting the hallucinogenic drug peyote while at work.

The court ruled the employee could not claim the right to do so as a practice of his Native American religion.

During the 1993 bill-signing ceremony, Clinton said, “It is interesting to note … what a broad coalition of Americans came together … to protect perhaps the most precious of all American liberties, religious freedom.”

Then-Vice President Al Gore also spoke, saying, “When you have the National Association of Evangelicals and the ACLU … we’re doing something right.”

“The country was very different 25 years ago,” Heritage Foundation President Kay Coles James said at Wednesday’s event with Whitaker. “A coalition from across the ideological spectrum, including everyone from Nadine Strossen of the ACLU and Mike Farris, who is now the CEO of Alliance Defending Freedom, came together to bolster freedoms that were limited by an unfortunate Supreme Court decision. …

“Boy, have times changed. I wish we could get that kind of bipartisan support today for something that is so important, like this. The political left has actively worked to undercut our freedoms,” she said.

James cited attempts by government to force religious institutions and even pro-life groups to pay for abortion-inducing drugs, and forcing small businesses to act contrary to their religious values.

Whitaker cited the Founders’ vision for religious freedom; namely, that of Thomas Jefferson.

“On his tombstone, it does not say he served as president of the United States,” Whitaker said of Jefferson. “It says three things, that he authored the Declaration of Independence, that he founded the University of Virginia, and that he authored the Virginia Statute for Religious Freedom.”

It was James Madison who championed the religious freedom statute in the Virginia Legislature.

“Within a few years, Madison became the father of the Constitution and the author of the First Amendment,” Whitaker added. “Jefferson, Madison, and the rest of the Founders took great care to protect the rights of religious people in this country, and we look back now, and we can see why: because religious freedom has made this country stronger.”