Civil Disagreement Should Be Possible in America 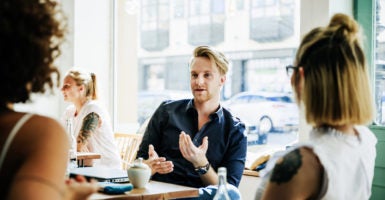 "The moment for a New Year’s resolution has passed, but it’s never too late to resolve to do the right thing," writes Russ Latino. (Photo: Tom Werner/Getty Images)

Russ Latino is vice president of the Economic Opportunity Portfolio at Americans for Prosperity.

The veins in his forehead visibly pulsed as he barked talking points at a fellow guest. The volley back was equally intense. The volume and rapid breathlessness of the two combatants’ speech escalated to the point of being incoherent.

I turned off the TV.

I don’t know who they were or remember why they were arguing—just that they were angry, loud, and emblematic of how modern cable news frequently devolves into the verbal equivalent of street fights.

Of course, relative to social media, the talking heads on the evening news embody a quaint, near-Mr. Rogers-like charm. In the unfettered digital sphere, facts and reason are often supplanted by unsupported opinion and raw—sometimes vulgar—emotion.

This time in history is peculiar. We have access to more information than ever before, and yet, people are more confused.

We are more connected to each other than ever before, too, and yet, people are lonely. Despite unrivaled levels of human advancement, both “sides” of the political spectrum feel as though they are losing a winner-takes-all culture war.

A confluence of factors brings us to this moment. The advent of the 24-hour news cycle is one factor. Social media, political correctness, and pervasive fearmongering play roles as well.

Together, they have stifled the honest exchange of ideas and fostered the rise of a toxic form of tribalism that threatens the fabric of our country.

To be clear, neither traditional nor social media are inherently bad. Both can be a source for good. But overtly partisan media and targeted social media algorithms carry the very real potential that Americans are exposed only to opinions that confirm our natural biases.

Because of round-the-clock coverage and access, people are deluged with those opinions.

This is also not nostalgia for a time that never was or naivete about what are legitimate differences of opinion.

History is replete with examples of charlatans exploiting emotions, and there are serious problems, with real disagreements, that need solving. But the constant drumming of division, and the resulting ideological chasm, all but ensure that conversations that could put us on the right path don’t occur.

Tribalism becomes dangerous, however, when it results in reflexive hostility to new people and new ideas.

In politics, people once united around common beliefs to form tribes, but there was recognition that the tribes had to talk to one another to get things done.

Today, allegiance to philosophical moorings has become fungible, while our desire to find common ground has waned. Political tribes now unite primarily not to advance ideas, but to oppose “the other side.”

In this new reality, “the other side” is not merely wrong, but the enemy. The enemy deserves no respect. Intellectual rigor that involves considering alternate views is now heresy.

Angry and loud are signs of strength and courage; civility, a mark of weakness. We are, after all, at war.

Except that Americans are not actually at war with each other. People who disagree with us are not the enemy, evil, or even dumb. They have a different worldview rooted in their own experiences.

It takes little courage to be a hothead or blindly follow the edicts of your tribe. It takes a lot of courage to listen to someone who sees things differently, to speak uncomfortable truths and question power.

We are worse off in a world where we are isolated from people and ideas that challenge us, where meaningful discussion of hard issues can’t occur without having allegiances and motives questioned, and where we overlook the faults of our tribesmen and assume the very worst of those in other tribes.

We all want more opportunities for our families, communities, and future generations. We all have hopes that inspire us and fears that bind us.

The moment for a New Year’s resolution has passed, but it’s never too late to resolve to do the right thing.

We should resolve to turn off our television sets and smart devices long enough to actually speak to people who look, think, and act differently from us and to learn from them.

We should resolve to be decent to one another, even when we disagree.R