In the span of less than 24 hours, CNN inadvertently helped President Donald Trump make his case for funds to build a new barrier at the southern border not once, but twice.

On Thursday, the network’s chief White House correspondent, Jim Acosta, posted a video showing viewers how an already-walled section of the border is “crisis-free.”

I found some steel slats down on the border. But I don’t see anything resembling a national emergency situation.. at least not in the McAllen TX area of the border where Trump will be today. pic.twitter.com/KRoLdszLUu

In doing so, he showed how barriers act as a deterrent and facilitate safety and order along the border.

“I live along the border, about a little over 10 miles from the border. It’s San Diego. I mean, it’s basically paradise,” Rep. Juan Vargas, D-Calif., told Lemon. “It’s one of the safest places in the country. And the notion that we have a crisis there, a security crisis, is absolute nonsense.”

Vargas is right. San Diego is a thriving community with the lowest violent crime rates of any major city in the country, according to FBI data. Coupled with its year-round beautiful weather, most of us would be lucky to live in this part of the Golden State.

But San Diego wasn’t always this way, and the fact that it shares a border with Tijuana, the fifth-most dangerous city in the world, makes it an even more interesting case study to examine how walls and fences—when used strategically—work. 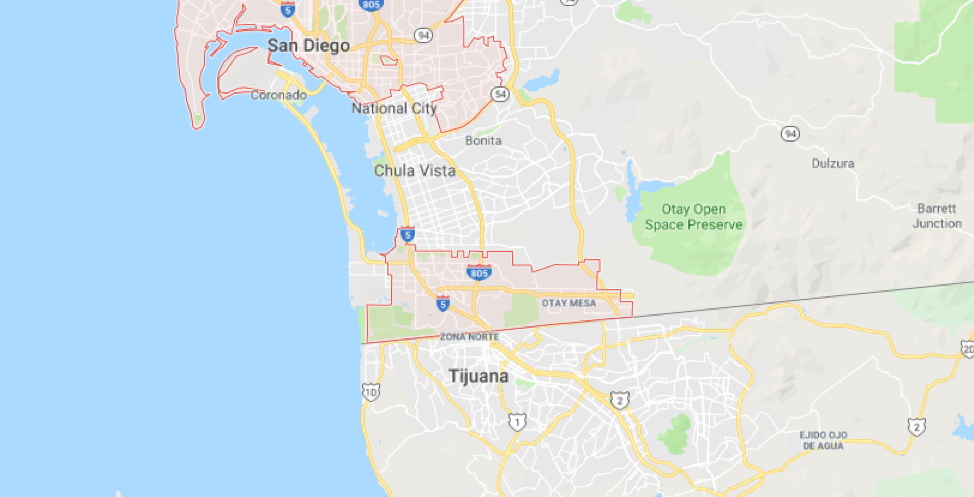 Directly south of San Diego are the Mexican cities of Tijuana and Tecate, which have a combined population of more than 4.5 million, according to the Department of Homeland Security. (Graphic: Google Maps)

In the 1980s, illegal border crossings plagued the San Diego sector of the U.S.-Mexico border.

The Border Patrol reached its breaking point in 1986, when agents caught more than 600,000 illegal border crossers. At the time, this accounted for approximately one-third of all apprehensions along the southern border.

In 1991, the government began construction of a 46-mile-long wall, now referred to as the “primary fence.”

This fence stands between 8 and 10 feet tall. It was tall enough to stop vehicle traffic, but could be easily breached by ladders and fence jumpers.

In 1997, officials began building what’s known as the “secondary fence,” which runs 13 miles long and stands at 14 to 18 feet tall. This was meant to stop the illegal flow of foot traffic.

Today, the San Diego sector accounts for only a small fraction of border apprehensions each year. According to the Department of Homeland Security, illegal crossings have decreased in the region by more than 90 percent since the walls and fences were built.

Of course, it’s impossible to say how much of the decreased crime rates can be attributed to the addition of border walls and fences, as crime rates also dropped across the country. But given the dramatic decrease, it’s safe to conclude that walls and fences played a significant role.

“I have two daughters, I have a wife, you know, I come to D.C., I flew from San Diego today,” Vargas told Lemon on CNN. “I can tell you, they are safe. They are safe in San Diego, much safer than they would be here in D.C.”

Vargas is right. Crime rates are lower in San Diego than in Washington, D.C.

But would the congressman feel that way if there weren’t fences and a wall separating his daughters from a city that just had its most violent month in all its history?

Today, the border between San Diego and Mexico is so safe and controlled that families and businesses have moved in where they’d never been before.

During a trip to San Diego in 2017, I visited a shopping center located directly on the U.S. side of the border. You can see the border wall from most of the stores. This shopping center didn’t exist until after lawmakers approved a wall, nor did many of the luxury houses surrounding it.

At the shopping center, I spoke with a Mexican citizen named Heriberto Beltran, who crossed through the pedestrian port of entry on his day off from work to shop.

“It took me like 15 minutes, so it’s not hard at all,” Beltran said. On a busier day it could take longer, he added, but the wall seemed like no big deal to him.

Why? Because San Diego has a big wall, but it also has massive gates.

“People are getting so obsessed with symbolism, rather than substance,” Brian Bilbray, a former Republican congressman from California, told me during my visit.

“San Diego has the largest land port of entry in the world,” Bilbray said. “We have the biggest gate. But we also have a high fence. They have a saying in Mexico: ‘Good fences make good neighbors.’”

House Speaker Nancy Pelosi, D-Calif., infamously called walls and fences “immoral.” Yet no one has bothered asking her what that means for San Diego—or why so many Democrats supported these efforts in the past.

If you visit San Diego, it’s difficult to imagine a fence or wall never being there at all.

Democrats know this. Vargas knows that because of walls and fences, his children are better off. But Democrats aren’t interested in talking about the truth. They’d rather stick it to Trump.

A border wall is not the silver bullet that will solve the nation’s illegal immigration problem. In fact, it’s only a small step. But the San Diego example suggests that if we take this small step, the country could benefit in more ways than one.

As Bilbray said, “The fence sends the very clear message to everybody before they even try to cross the border: ‘No, don’t come here the wrong way. If you want to come to America, come here through the gates.’”

Or, as Trump likes to call it, the “big, fat, beautiful open door.”