Lawmakers Are Pushing a $15 Minimum Wage. Here Are 3 Disastrous Consequences That Would Result. 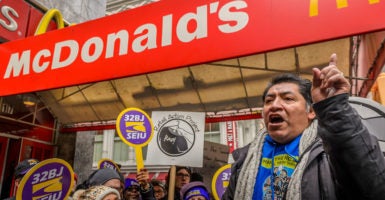 A $15 minimum wage would result in the elimination of 7 million jobs, according to a Heritage Foundation study. Pictured: In 2017, days ahead of Andy Puzder's confirmation hearing for labor secretary, several workers in the fight for $15 took their opposition to downtown New York. (Photo: Erik Mcgregor/Pacific Press /LightRocket/Getty Images)

House Democrats are looking to double the minimum wage, with little eye to the consequences.

Led by Virginia Democrat Bobby Scott, House Democrats introduced the Raise the Wage Act, which would more than double the federal minimum wage from $7.25 to $15 per hour by the year 2024.

Democratic lawmakers have long been in favor of a higher minimum wage, but few have gone so far as to call for doubling it. Until now.

Despite caution from some liberal economists who warn that a $15 minimum wage would “risk undesirable and unintended consequences” and disproportionately hurt younger and less-educated workers, as well as immigrants, more than 180 Democratic members signed on to support the bill.

But the result would be quite different from what they expect. While a $15 minimum wage would raise wages for some workers, it would have disastrous consequences for many others.

Here are three consequences that these advocates need to consider.

A Heritage Foundation analysis from 2016 estimated that a $15 federal minimum wage would wipe out 7 million jobs. Hardest hit would be workers, businesses, and economies in areas with low costs of living.

Liberal activists demand a “living wage,” but the truth is that only a tiny handful of hourly wage workers make the minimum wage or less (4 percent), according to the Employment Policies Institute. On the contrary, a whopping 44 percent of hourly workers currently earn at or below the proposed $15 minimum wage.

Now consider what the $15 minimum wage would do.

For a restaurant that employs 10 minimum wage workers, a $15 minimum wage hike would cost them about $170,000 per year. If the restaurant currently earns profit margins of 5 percent, it would have to increase sales by $3.5 million per year, or an extra $67,000 every week.

But that is not realistic. The likely scenario is that they’ll either have to cut working hours or fire some workers altogether. Either way, most people are worse off than before.

This pattern has played out countless times already. FacesOf15.com documents more than 150 businesses that have had to lay off workers, reduce hours, increase prices, or shut their doors altogether due to minimum wage hikes.

In fact, voters in Washington, D.C., passed a minimum wage hike for restaurant workers last year, but the City Council blocked the measure after waiters and waitresses came out in droves to oppose it. Their initiative was known as “Save Our Tips.”

Fight for $15 advocates treat minimum wage jobs as if they’re lifetime positions. But they’re not. The vast majority of these jobs are not filled by single mothers struggling to make ends meet—the minimum wage cannot support a family, and isn’t designed to.

Instead, minimum wage jobs are almost exclusively entry-level positions that serve as an opportunity to gain experience that will lead to higher earnings and better opportunities down the road. In fact, most workers who start out earning the minimum wage receive a raise within a year.

One study of Seattle’s minimum wage increase found that it caused employers to weed out workers with lower skills and experience, and reduced the rate of job entry—meaning fewer young workers could find entry-level jobs to gain experience.

By effectively cutting off the first rung of the career ladder, a $15 minimum wage could stifle young people’s long-term earnings prospects by keeping their careers from getting off the ground.

3. One step closer to a universal basic income.

At $15 an hour, the cost of employing a worker year-round would be upward of $35,000 at the very least. Many workers—particularly younger workers and those without any experience under their belt—simply cannot produce that kind of value.

It’s hard to make the case for a universal basic income in this currently thriving economy, where we have more job openings than workers looking for jobs. But cutting a large share of the population out of work by passing a $15 minimum wage would certainly take us one large step in that direction.

Artificially driving up wages so that millions of people can’t find work and have to rely on the government for a basic income—financed with more federal debt—is not just economically destructive. It’s morally wrong.

If lawmakers want to help workers achieve higher incomes, they should first do no harm and be sure to leave open the doors of entry-level employment that allow workers to gain valuable experience that jumpstarts their careers.

Even before they are old enough to work, policymakers can improve children’s earning potential by giving their parents school choice options. These options particularly help children of lower-wage earners escape poor and failing schools that neglect to provide them the education they need to earn a decent living.

Another way to help raise wages would be to eliminate taxes on capital gains and dividends, which amount to double taxation, since those earnings are already subject to the income tax. This would allow businesses to reinvest that money in technologies that make their workers more productive, and ultimately increase worker earnings.

Finally, lawmakers could reform our unsustainable entitlement programs by better targeting them to those in need. This could result in lower payroll taxes and in turn increase workers’ take-home pay.

Congress has plenty of options to help workers earn higher wages. But lawmakers must do the math and accept the facts: A $15 minimum wage would do more harm than good.