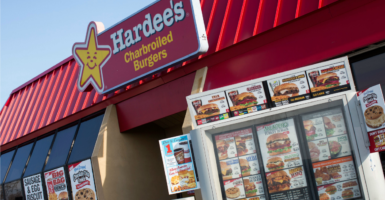 A former Hardee's employee is arguing her years of work without a raise show why Andy Puzder is a problematic pick for labor secretary. (Photo: Kris Tripplaar/Triplaar Kristoffer/SIPA/Newscom)

In an op-ed published Tuesday by The Washington Post, Wise writes, “I already know what Trump/Puzder economics look like because I’m living it every day. Despite giving everything I had to [labor secretary pick Andy] Puzder’s company for 21 years, I left without a penny of savings, with no health care and no pension.”

Wise worked for 21 years at Hardee’s, which is one of the chains Puzder leads as head of CKE.

Already, the left has jumped on Wise’s story:

After working for Puzder for 21 years, JoAnn left without a penny of savings, with no health care and no pension. https://t.co/e49TlD2XfA

Brutally damning essay about Andy Puzder from a woman who worked for Hardee’s for 21 years. Whoo boy: https://t.co/C0nFyUCRzM pic.twitter.com/3FYC9Kbvr1

Andrew Puzder will be a disaster for workers. I know: He was for me. – JoAnn Wise #Fightfor15 #NotOurLaborSec https://t.co/EPo31V9OMf

But what’s left unaddressed in Wise’s op-ed is: Why didn’t she leave Hardee’s?

Wise says she asked for raises multiple times and was denied. Perhaps she did deserve a raise. Maybe she should have been promoted further. (She mentions being promoted in her first year, but not after.)

But no one forced Wise to stay with Hardee’s for 21 years without a significant raise. She could have switched jobs to somewhere her talents would have been recognized and/or she could have pursued additional training to be a more attractive candidate for jobs that required more skills and paid more.

I don’t know Wise’s full story, and perhaps there were personal circumstances that made switching jobs or acquiring new training difficult to do. Certainly, she sounds like a hardworking individual.

But does that mean she deserved a higher salary?

I worked at Burger King for two summers in high school, which I realize is a far shorter span than Wise’s. Nonetheless, it certainly gave me a new appreciation for the work of fast-food employees.

It was often tough work, and I don’t remember with fondness simultaneously taking orders, filling orders, and making change at the drive-thru, all while a clock monitored how long each transaction took to make sure it didn’t rise above a certain average time.

But was it work that should have given me a salary enough to support myself and a family?

Underlying Wise’s argument is the thesis that any full-time job, regardless of how few skills it requires, should pay enough for an adult to be self-supporting and, with a partner’s salary, raise children. She writes:

… even with my husband’s salary as the head cook at Fort Jackson, we relied on food stamps and Medicaid. We were two full-time-employed adults; we shouldn’t have had to turn to the government, but we had kids to raise, and so we were left with no other choice.

That’s a thesis the left largely seems to have embraced, particularly with the rise of the movement for $15 an hour wages for fast-food employees. In his 2013 State of the Union, President Barack Obama also made the case for that viewpoint, stating, “Even with the tax relief we put in place, a family with two kids that earns the minimum wage still lives below the poverty line.  That’s wrong.”

But it’s a thesis with troubling implications.

For one thing, it’s not clear companies will respond to higher minimum wages by simply hiring the same number of people at the new wage level. There’s already concerns that fast-food restaurants will turn to more and more automation, such as having people order via machines.

In addition, not everyone who is looking for work needs to be able to support themselves and a family.

When I was 15 and working my first summer at Burger King, I knew I needed some money—and I also knew a first (non-babysitting) job would give me valuable skills. In fact, a lot of minimum wage workers are in a similar situation, according to a 2013 Heritage Foundation report:

Many support raising the minimum wage because they want to help low-income Americans get ahead, but minimum-wage earners are not much more likely to live in poverty than are most other Americans: Less than 1 in 4 live in a family with earnings below the poverty line. Two-thirds work part-time, and most are between 16 and 24 years old.

But raising the minimum wage could have the effect of eliminating jobs—which would make it harder for teens and young adults to get that crucial first job, which often helps them get the next better paid job.

Sure, I would have loved to make more than $6.75 an hour at Burger King (minimum wage in California at the time)—but I would also have rather made that than not had the job at all, because it had become automated.

It’s important to have low-skill, first jobs available so young adults can learn skills about teamwork and responsibility—and ultimately move on to jobs that pay enough to support themselves and a family.

There are also other ways to help situations like Wise’s besides hiking the minimum wage. Better schools and overall better educational opportunity for all Americans, via school choice policies, could help ensure most Americans are better equipped to do well in the working world, or advance in higher ed.

Costs that families must bear could be driven down by eliminating certain regulations—for instance, “Corporate Average Fuel Economy standards add $3,800 to the cost of an average new car,” noted The Heritage Foundation’s Salim Furth in a report last year.

There are certainly changes that could help make lives for working families in America easier. But raising the minimum wage is a policy that is more likely in the long run to hurt, rather than help, many working Americans.