The Peace Cross Honoring Fallen Veterans Should Not Be Bulldozed 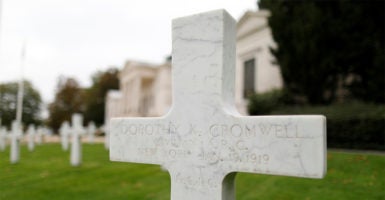 The Peace Cross monument in Prince George's County, Maryland, could be demolished if the American Humanist Association gets its way. (Photo: Charles Platiau/Reuters /Newscom)

Forty-nine families in Prince George’s County, Maryland, lost their sons in World War I. With their loved ones buried in European theaters of war, most of the families could not visit the graves.

So in 1925, the American Legion and the Gold Star families erected a monument in the county to them—and all soldiers who gave their lives in the “war to end all wars.” Known as the Peace Cross, it symbolizes both spiritual peace for the departed as well as hoped-for peace between the nations.

When the monument was erected, a cross-shaped gravestone was a common, even universal, symbol of service and sacrifice. But America’s religious profile has changed dramatically over the years, with growing numbers disavowing traditional beliefs.

In 1941, the American Humanist Association was founded. A tax-exempt organization, its mission is to enable “human beings to lead personal lives of ethical fulfillment that aspire to the greater good of humanity.”

Humanists provide social services like disaster relief. They promote their beliefs by running ads on public buses that say, “Why believe in a god? Just be good for goodness’ sake.” They express their beliefs, in public, with little fear of harassment or suppression.

But they took offense at the religious symbolism of the Peace Cross on government property and filed a lawsuit seeking to bulldoze it. The Supreme Court will now decide on their claim that the cross violates the Constitution’s establishment clause.

America’s Founders did not envision either a sacred or a secular public square. The First Amendment’s establishment clause prohibits the government from making any law “respecting an establishment of religion,” but it is increasingly misused by activists to erase any semblance of religion from public life.

Last year, the Supreme Court overturned an establishment clause challenge to a church’s ability to compete against secular organizations for public funds to renovate a school playground. In the majority opinion, Chief Justice John Roberts wrote that excluding a church “solely because it is a church, is odious to our Constitution all the same, and cannot stand.”

Similarly, the high court should rule that excluding a memorial from public grounds simply because it has religious significance is odious to our Constitution. In America, humanists have the freedom to publicly commemorate the end of life without reference to God. Christians and people of other religions should be able to do the same with reference to God and hope in eternity.

At a minimum, we should respect the universal symbol of service and sacrifice that Gold Star mothers chose for us to remember their sons.

Much is at stake in the upcoming hearings. Our nation’s soil is richly populated with monuments to patriots of many religions from many battles. More than 60 different religious emblems grace the headstones of soldiers in Arlington Cemetery, from the cross to the Star of David, from the Crescent and Star of Islam to a symbol for an American Indian church.

And one symbol, of a person reaching upward with outstretched hands, is the symbol of the American Humanist Association.

The Veterans Administration permits these graphics on headstones and markers and pays for their upkeep because these symbols have meaning, not just to those who mourn, but to the generations who now enjoy the freedom for which those soldiers fought.

On Sunday, Americans from coast to coast commemorated the 100th anniversary of the signing of the armistice that ended World War I’s hostilities. All of us should be grateful for the sacrifices made on our behalf by veterans and their families.

And in an increasingly pluralistic country, our highest court should respect the freedom of all Americans to honor the dead according to the beliefs that they hold most sacred.