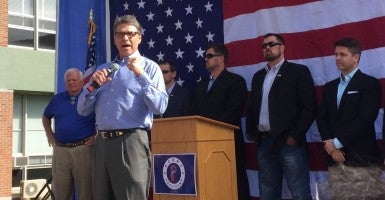 NASHUA, N.H.—Former Texas Gov. Rick Perry promised during a campaign stop today that he would reform the Department of Veterans Affairs if elected president of the United States.

Perry, speaking at Nashua Community College in New Hampshire, pledged to work for veterans “until I take my last breath.”

“If you elect me your president, there will be an individual that goes to the Oval Office every day, committed to the military men and women and to the veterans of this country,” Perry said.

“It won’t be an afterthought. It will be every day walking in that Oval Office, asking the chief of staff if we’re getting the VA straightened up, if we’re getting the work done for these veterans—men and women who held their hand up and who said, ‘Here I am, send me.’”

Perry said that “we made them a promise” and “we’ll live up to it.”

Speaking more generally about how he would approach the option of military force overseas, Perry said that when all other options have been exhausted, and war becomes a necessity, then the United States should fight with “crushing power,” then “go home.”

Perry, who declared last week that he will be a Republican candidate for president in 2016, also discussed his economic platform.

He said that a reduction of the corporate tax rate would result in more jobs and higher wages for American workers.

Before his remarks, Perry spoke briefly with John Constantino Jr., a veteran and New Hampshire resident.

Constantino told The Daily Signal that he discussed with Perry “how to straighten up the VA.”

“We’ve got to get a military man in there,” Constantino said. “He’s [Perry] number one on my list.”

Perry and his wife, Anita, were joined onstage by several supporters, including Marcus Luttrell, the author of the best-selling book, “Lone Survivor,” his twin brother Morgan Luttrell, and author Brad Thor.