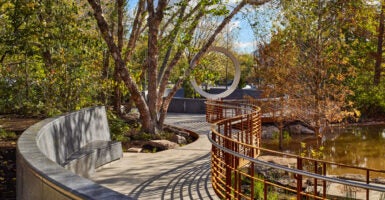 “There were terrible moments that encompassed a lifetime, an endlessness, when terror was so strong in me, that I could feel idiocy replace reason. [Yet,] I have never left my position, nor have I shirked hazardous duty. Fear did not make a coward out of me.”

When asked about his call to duty, Woodrow Keeble gave this response. A late member of the Sioux tribe in South Dakota, Keeble received the Medal of Honor for his astounding bravery in the Korean War.

His actions to save Company G are unparalleled, however his words share the spirit many Native American servicemen and women carry as they fight alongside their fellow citizens—a spirit that was honored in a new way on Veterans Day.

On Wednesday, Veterans Day, the first national Native American Veterans Memorial was unveiled in Washington, D.C. For the first time, citizens from across the country are able to witness and appreciate the sacrifice each of these individuals has made in an effort to preserve this nation and the spirit they carry with them.

Designed to be an elevated stainless steel circle balanced on a carved stone drum, the memorial is intended to be a timeless, powerful expression of memory and gratitude.

Its designers intentionally incorporated water for sacred ceremonies, benches for reflection, and lances for visitors to tie prayer cloths. Its design is meant to establish the memorial as a gathering place for peace and community—values deeply engrained in the Native American community and this country as a whole.

The memorial now sits on the National Mall beside the Smithsonian National Museum of the American Indian, on display for residents, citizens, and all who come to honor Native American veterans.

Located in front of the National Museum of the American Indian, the memorial not only offers reflection and healing, but also opportunity for education and acknowledgement of veterans’ history of maintaining the warrior tradition.

Indeed, Veterans Day offers citizens a chance to express their gratitude for retired armed forces and for the men and women on the front lines, however many are unaware of the impact Native American veterans have had throughout history as servicemen and servicewomen in uniform.

The United States first began to witness this unification in World War I, when 3,000-6,000 Native Americans enlisted to fight alongside their fellow patriots, and 10,000 Native American women joined the Red Cross. Support from these communities then grew exponentially following the attack on Pearl Harbor in 1941, when numbers of native servicemen grew to 40,000.

Now, Native American service members represent the highest per capita involvement of any population to serve in the U.S military.

While some might question why these communities would fight for a nation that, in its history, oppressed and confined them, these veterans see defending their communities and land not as a choice, but as a sacred purpose.

For them, defending democracy and caring for at-risk individuals is the warrior’s tradition. In this way, old wounds begin to heal and American citizens of all communities come together to fight for a common goal.

Undoubtedly, the greatest American patriot is he who sacrifices himself for the defense of this nation and its democratic ideals. The patriot who risks his life for the betterment of the land, culture, and the people themselves. Among these patriots are Native American veterans like Keeble—a group who received national recognition for their service this Veterans Day.

The memories of Woodrow Keeble and thousands of other Native American war veterans tell the story of how values of land and community transcended historical divisions.

May this country pause to reflect on the valor of this community, along with the heroism and strength of all veterans who have fought for the freedom of this great nation, past and present.