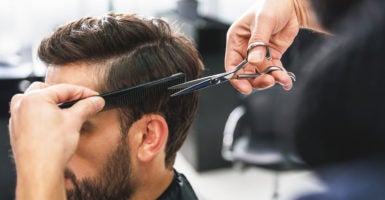 Few things could be more American than volunteering to help others. So it’s a shame when our altruism is thwarted by another, far more lamentable American trait: big government.

Juan Carlos Montes de Oca knows firsthand. A cosmetology student from Tucson, Montes de Oca felt inspired when he heard about a barber in London who donated haircuts to the homeless on his days off. So he decided to do the same for homeless veterans in Arizona.

He did this free of charge, of course, to give the veterans a better appearance and a more positive outlook when applying for jobs. “Out of the kindness of my heart,” he told a reporter. “Out of the memory of my mom, because she lost her hair.”

Well, we can’t have that, can we? So to the rescue rides what the Arizona Republic referred to as “the hair police”—the Arizona State Board of Cosmetology.

What a monster. Grab the torches and pitchforks!

It seems you can’t just set up shop and start shearing locks in the Grand Canyon State, no matter how talented you may be. A state law requires 1,000 hours of training at a state-licensed school.

>>> How Arizona Is Using Licensure Laws to Punish Compassion

A dozen years ago, they swooped down on a 23-year-old Glendale woman who was braiding the hair of African-Americans. The cosmetology cops informed Essence that she’d have to get a license to do that which she’d been doing since she was 13 years old.

To get that license, she would have to take 1,600 hours of classes at a state-approved cosmetology school, paying tuition of $10,000 or more to learn everything from how to cut and curl to how to manicure and massage. Everything, that is, but how to braid hair.

The state Legislature passed a law to fix this, but then along came the case of Juana, a 24-year-old eyebrow threader. She had been doing this kind of work for eight years, but the “cosmetology cops” told her she’d have to stop. Only a licensed aesthetician could do such work.

Juana, the Republic reported, would “need 600 hours of state-approved classes, learning everything from laser safety to Botox theory, from how to apply chemical peels and how to tint eyelashes. Everything, that is, but how to remove hair with a thread.”

It took a long fight and a lawsuit to get that requirement fixed. But you can never rest easy where government is concerned—as soon as you pluck one bureaucratic weed, another starts growing in its place.

Which brings us back to the case of Montes de Oca. His plight has captured the attention of Arizona Gov. Doug Ducey, who noted in his recent State of the State address that a cosmetology license requires “25 weeks [of training], more than an EMT, certified nursing assistant or truck driver.”

He’s pushing to ease the draconian requirements for a cosmetology license.

Ducey referred to the cosmetology board as “bullies.” He’s right. But that’s par for the bureaucracy at any level of government.

This case and many others like it show us an eternal truth: The government’s natural tendency is to expand beyond its original tasks—to reach into the details of our everyday lives and dictate what we can and can’t do. That’s why we call it “the nanny state.”

Yes, their rules and regulations may be well-intentioned. But that doesn’t change the fact that this mission creep can cause real harm—or that we need to resist it at every turn.

Hair, after all, isn’t the only thing that needs to be cut. So does big government.