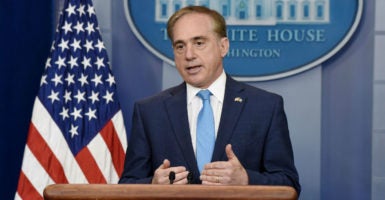 Department of Veterans Affairs Secretary David Shulkin speaks during a briefing at the White House, May 31, 2017. (Photo: Douliery Olivier/Sipa USA/Newscom)

Department of Veterans Affairs Secretary David Shulkin said Wednesday the civil service appeals process prevents the agency from firing “terrible managers,” and that the Senate must act to reduce the impact of the Merit Systems Protection Board and excessive government employee union-backed due process requirements.

“Just last week we were forced to take back an employee after they were convicted no more than three times for DWI and had served a 60-day jail sentence … Our accountability processes are clearly broken,” Shulkin said at the White House.

Shulkin was promoted to the VA’s top job by President Donald Trump after being appointed by former President Barack Obama as undersecretary. Those positions have given Shulkin direct experience with the extent to which union-backed rules block the firings of poor performing employees.

“We had to wait more than a month to fire a psychiatrist who was caught on camera watching pornography on his iPad while seeing a patient,” he said. “Because of the way judges review these cases, they can force us to take terrible managers back who were fired for poor performance, we recently saw that with one of our executives in San Juan.”

Shulkin was referring to DeWayne Hamlin, a hospital director who was fired Jan. 20 for corruption but was then quietly returned to work.

“We need new accountability legislation and we need that now,” Shulkin said. “The House has passed this and we’re looking forward to the Senate considering this.”

The Senate Committee on Veterans’ Affairs reported the “VA Accountability and Whistleblower Protection Act of 2017 earlier this week for a vote by the full chamber. The measure is co-sponsored by Sens. Marco Rubio, R-Fla.; Johnny Isakson, R-Ga., and Jon Tester, D-Mont.

“We currently have 1,500 disciplinary actions pending, people that either need to be fired, demoted, suspended without paid for violating our core values,” Shulkin said.

“The expedited senior executive removal authority given to us in the Choice Act isn’t working, we weren’t able to use that because of constitutionality issues.”

In addition to the Hamlin controversy, a federal appeals court ruled that the VA may not be able to fire Sharon Helman, who is a convicted felon, for her misconduct as the head of the Phoenix VA, where dozens died waiting for care as managers reported false data on wait times in order to get bonuses.

Helman is represented by the law firm of Shaw, Bransford & Roth, which critics say makes its living trying to block employees of all levels from being fired. Employees are encouraged to appeal any discipline, however well-deserved, because a former Roth lawyer created an insurance company that pays for fired employees to hire the law firm.

The premiums on that insurance plan are billed to taxpayers, thanks to a law pushed by the firm’s lobbyists.

Dan Caldwell, policy director for Concerned Veterans of America, also encouraged the Senate to approve the accountability measure, saying Shulkin “is working to move the VA in a better direction, but the problems will not be solved until Congress takes action. They should also remember that the VA’s problems are not due to a lack of resources.”