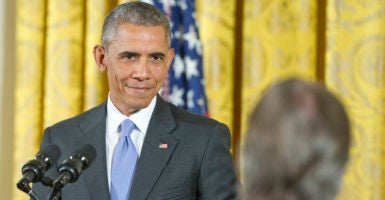 President Barack Obama listens to a question from CBS News reporter Major Garrett during a press conference July 15, 2015, in the East Room of the White House. (Photo: Ron Sachs /CNP/Newscom)

President Donald Trump and CNN White House correspondent Jim Acosta have their own styles that may seem outside the lines of “decorum” to some. But presidential duels with reporters aren’t unique to the current president or any network.

The White House revoked Acosta’s hard pass after a Nov. 7 news conference where the reporter refused to yield the microphone after Trump sought to move on to another reporter.

Trump lectured Acosta: “CNN should be ashamed of itself having you working for them. You are a rude, terrible person. You shouldn’t be working for CNN.”

The new White House rules state: “A journalist called upon to ask a question will ask a single question and then will yield the floor to other journalists.”

The rules go on to say, “At the discretion of the president or other White House official taking questions, a follow-up question or questions may be permitted; and where a follow up has been allowed and asked, the questioner will then yield the floor.”

Past presidents handled such confrontations differently.

Here’s a look at six cases of how past presidents navigated sometimes hostile questions at news conferences.

The highly popular Dwight Eisenhower held the first televised presidential news conference in January 1955, kicking off the third year of his first term. It was a generally noncontentious event.

However, during the first year of Eisenhower’s second term, the president known for his love of golfing became testy with a reporter who asked about his golf outings.

The reporter asked: “Sir, do you think there are any economies you can make in the executive branch to help cut government spending? For instance, would you be willing to do without that pair of helicopters that have been proposed to get you off to the golf course a little faster than you can make it in the car?”

Others in the room laughed. But Eisenhower didn’t crack a smile.

“Well, I don’t think much of the question,” the president said, “because no helicopters have been procured for me to go to the golf course. Thank you. That’s all.”

After Eisenhower said “that’s all,” the reporter didn’t continue shouting questions as Acosta did when Trump sought to move on.

2. Obama: ‘You Should Know Better’

Barack Obama was renowned for getting glowing press coverage. But after his administration hammered out the controversial Iran nuclear deal, he was visibly agitated by a tough question from CBS News reporter Major Garrett at a July 2015 press conference.

Garrett asked about four Americans being held prisoner in Iran.

“As you well know, there are four Americans, three held on trumped-up charges and according to your administration, one whereabouts unknown,” Garrett said.

He continued: “Can you tell the country, sir, why you are content, with all the fanfare around this deal, to leave [the] conscience of this nation, the strength of this nation, unaccounted for in relation to these four Americans?”

Obama gave a steely look that evolved into a smirk and then a grin as he shook his head.

“I’ve got to give you credit, Major, for how you crafted those questions,” Obama said. “The notion that I am content as I celebrate with American citizens languishing in Iranian jails—Major, that’s nonsense and you should know better. I’ve met with the families of some of those folks. Nobody is content.”

ABC News reporter Sam Donaldson was arguably the most antagonistic White House reporter during the presidency of Ronald Reagan. However, it was largely a professional exchange, as Donaldson expressed high regard for Reagan in the years since.

Early in Reagan’s first term, Donaldson asked at a press conference: “Mr. President, in talking about the recession tonight, you have blamed mistakes of the past, and you have blamed the Congress. Does any of the blame belong to you?”

Reagan famously answered: “Yes, because for many years I was a Democrat.”

In November 1986, Donaldson was among the reporters asking tough questions of Reagan during the second-term controversy known as Iran-Contra.

Reagan had denied knowledge of the U.S. trading arms for hostages.

Donaldson asked: “The polls show that a lot of the American people just simply don’t believe you. The one thing you’ve had going for you more than anything in your presidency, your credibility, has been severely damaged. Can you repair it? What does it mean for the rest of your presidency?”

Reagan responded: “Well, I imagine I’m the only one around who wants to repair it, and I didn’t have anything to do with damaging it.”

Richard Nixon generally disliked the press, and his rocky relationship with Dan Rather, then White House correspondent for CBS News, was certainly no exception.

Still, one press conference stands out—not for its combativeness, but for the sarcasm.

In March 1974, five months before Nixon resigned, the president held a press conference in Rather’s hometown of Houston. Oddly, it included an audience of non-journalist spectators who applauded Nixon’s comments.

When Rather introduced himself, the audience cheered the native Texan, but some booed. Nixon joked: “Are you running for something?”

Rather shot back: “No sir, Mr. President. Are you?”

Rather later said he regrets nearly everyone recalls that exchange, but few recall the question that followed.

Rather asked: “How can the House meet its constitutional responsibility while you, the person under investigation, are allowed to limit their access to potential evidence?”

Nixon answered: “Well, Mr. Rather, I am suggesting the House follow the Constitution. If they do, I will. ”

Nixon resigned from office in August 1974. It’s ironic that just more than three decades later, Rather resigned as anchor of “CBS Evening News” after a scandal that came to be known as “Rathergate” or “memogate.”

Rather was the face of a CBS News story during the 2004 presidential election that accused President George W. Bush of not fulfilling his National Guard responsibilities decades before.

However, the story was based on documents that turned out to be phony. Rather resigned from CBS News under pressure in early 2005. Several CBS News staffers were fired.

5. Clinton Fields ‘Not Worth It?’ Question

In February 1998, Bill Clinton held a joint press conference with British Prime Minister Tony Blair at a time when the president was under siege over allegations that he had an affair with a White House intern and lied about it under oath as part of an unrelated sexual harassment civil suit by former Arkansas state employee Paula Jones.

Clinton, facing scrutiny from independent counsel Ken Starr and the media, already had asserted that he didn’t have a relationship with intern Monica Lewinsky and that the accusations were false.

Still, media speculation was rampant that if Clinton committed perjury and orchestrated a cover-up, he would resign to dodge impeachment.

A reporter at the February 1998 news conference asked the president: “All these questions about your personal life have to be painful to you and your family. At what point do you consider it’s just not worth it, and do you consider resigning from office?”

Clinton didn’t become confrontational. He only smiled and shook his head, prompting Blair also to smile in the awkward moment.

Though not confrontational, the press conference was notable for being among the first times Clinton fielded questions on the Lewinsky scandal well before all of the facts emerged.

The president became more serious, and seemed to frame himself as a victim:

You know, I was elected to do a job. I think the American people know two or three things about me now that they didn’t know the first time this kind of effort was made against me. I think they know that I care very much about them, that I care about ordinary people whose voices aren’t often heard here. …

The pain threshold, at least for our side, being in public life today has been raised. But to give in to that would be to give into everything that I fought against that got me into this race in 1991 to try to run for president in the first place.

In August 1998, Clinton admitted to the affair with Lewinsky after the evidence caught up with him.

In December, the House of Representatives impeached Clinton, alleging he committed perjury before a federal grand jury and obstructed justice. The Senate acquitted him in February 1999, and he completed his second term. A federal judge found Clinton in contempt of court in the Jones lawsuit. Separately, in an agreement with federal prosecutors, Clinton temporarily surrendered his law license.

“If a CIA officer, paramilitary, or special operations soldier from the United States were captured in Iran or North Korea, and they were roughed up and those governments said they were interrogated in accordance with their interpretation of the Geneva Conventions,” Gregory said, before asking: “How would you react to that as commander in chief?”

“You can give a hypothetical about North Korea or any other country,” Bush said during the Rose Garden press conference. “The point is, the program is not going to go forward if our professionals do not have clarity in the law. … I’ll tell you again, David, you can ask every hypothetical you want. But the American people have got to know the facts.”