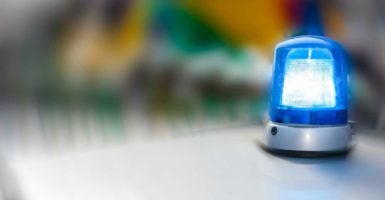 This month, the Washington, D.C., Criminal Code Reform Commission gave Mayor Muriel Bowser and the D.C. Council a set of sensible recommendations on “modernization of the District’s criminal statutes.”

It offers the mayor, council members, the public, as well as Congress and lawmakers in any jurisdiction much to consider. The commission has until Oct. l, 2018, to recommend revisions to the language of the District’s criminal statutes.

Its May report reflects commonsense, constitutional principles endorsed by parties across the political spectrum, including conservative leaders going back to the Ronald Reagan administration.

The commission’s report recommends specific actions to modernize the code, including the following:

Among the “archaic and unused offenses” recommended for repeal, whose existence is sure to surprise many, is “Playing Games in Streets.” (D.C. Code § 22-1308).

That provision makes it a crime to “play the game of football, or any other game with a ball, in any of the streets, avenues, or alleys in the City of Washington.” It would prohibit popular pastimes like frisbee and soccer, but, in addition to outlawing football, explicitly bans the “lesser-known” games of “bandy” and “shinty.”

The report also recommends striking laws that are unconstitutional. D.C. Code § 7-2506.01, for example, makes it a crime to possess ammunition, except under enumerated exceptions, even inside one’s home.

But in Herrington v. United States (2010), the D.C. Court of Appeals found that the Second Amendment “encompasses the possession of handgun ammunition in the home.” Before that, in D.C. v. Heller (2008), the U.S. Supreme Court held that “the District’s ban on handgun possession in the home violate[d] the Second Amendment, as [did] its prohibition against rendering any lawful firearm in the home operable for the purpose of immediate self-defense.”

The commission, to its credit, has identified the District ban as unconstitutional and advised repeal.

The commission also identifies 19 crimes whose elements are currently defined only in court opinions, rather than in the D.C. Code, in violation of 200-year-old Supreme Court precedent.

In United States v. Hudson & Goodwin (1812), the U.S. Supreme Court decided that U.S. courts do not “exercise a common law jurisdiction in criminal cases;” legislators, not courts, must define the elements of a criminal offense.

So the commission recommends abolishing judge-made crimes, like “negligent escape,” “disturbing public worship,” “being a common scold”—a remnant from 1901, when the District adopted the common law and British statutes in force in Maryland in 1801 (D.C. Code § 45-401)—and any other common law crimes that remain unidentified.

It also suggests that “common law offenses that have statutorily defined penalties be fully defined in the D.C. Code.” The commission rightly argues that “[t]he possibility of being convicted of judicially-created common law offenses, which have not been created by the legislature nor been used in decades, should be eliminated.”

As Paul Larkin, a Heritage Foundation senior legal research fellow, has argued, “Resurrecting a statute that has long been dead could trip up the average person whose intent is to comply with the law, because no one would reasonably know what that statute forbids.”

According to the commission, lawmakers must also amend 37 statutes that make technically obsolete references, such as referring to a “‘Corporation Counsel,’ which is now the attorney general for the District of Columbia.”

The commission identified another 127 statutes to jettison from Title 22 to better “organize existing criminal statutes in a logical order” without intermixing civil and criminal laws, so everyone can more readily know what is and is not a crime.

In advising the mayor and council, the commission emphasizes the “uncontroversial nature of its recommendations,” and how they will immediately enhance “the clarity and functionality of the District’s criminal statutes.”

The principles behind these recommendations are not new or controversial. In fact, they reflect most of the four “Principles for Revising the Criminal Code” that, in 2011, 75th U.S. Attorney General Edwin Meese III presented to Congress:

(1) consolidate criminal laws into a single title of the Code; (2) consolidate or eliminate ‘redundant, superfluous, and unnecessary criminal laws;’ (3) amend the law so that ‘[o]nly officials accountable to the people … have the ability to create any form of positive law that can serve as a basis for a criminal conviction;’ and (4) ensure that each criminal statute provides a standard of criminal intent, also known as mens rea (meaning ‘guilty mind’). The Commission’s report largely implements General Meese’s first three principles. And the fourth appears in the Commission’s mandate, which calls for revising the District’s criminal statutes so they ‘[d]escribe all elements, including mental states, that must be proven’ for a criminal conviction.

Toward the end of the Reagan administration, Robert H. Joost, then a judgment officer in the U.S. Commodity Futures Trading Commission, argued that “simplifying and rationalizing federal criminal laws” is “overdue;” it “is in the public interest and the necessary groundwork has been laid.”

The D.C. commission’s report reflects a similar need in the District and adds much to the groundwork for reform. It provides careful, transparent guidance on a rigorous methodology for reviewing the criminal code, one that District council members, as well as state legislators and members of Congress, would find profitable.

“All that remains,” Joost wrote, “is a commitment to see the task through.” The D.C. commission’s report is a testament to that ongoing commitment. Its recommendations are now before the council.