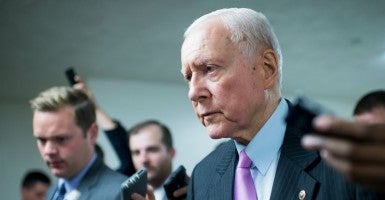 Sen. Orrin Hatch, R-Utah, speaks with reporters in the Senate subway as he arrives for a vote in the Capitol on Tuesday, July 14, 2015. (Photo Bill Clark/CQ Roll Call/Newscom)

This afternoon, Sen. Orrin Hatch, R-Utah, delivered an important speech on the Senate floor arguing that any criminal justice reform effort that is truly worthy of the name ought to include mens rea reform (also referred to as criminal intent).

I recently argued, as have other Heritage scholars, that there is a pressing need for such a reform and that this essential reform has been missing, at least so far, from the discussions that are currently ongoing on Capitol Hill about how to forge a bipartisan, bicameral compromise on meaningful criminal justice reform.

Hatch noted that there are nearly 5,000 federal criminal statutes and an estimated 300,000 criminal regulatory offenses – it is, in fact, a dirty little secret that nobody knows precisely how many there are – and that “[t]he upshot is that there are who-knows-how-many crimes on the books that the average person had no idea about and that criminalize conduct no reasonable person would think was wrong.” Many of these laws and regulations, Hatch added, “contain inadequate mens rea requirements, or even no mens rea requirements at all.”

Without adequate mens rea protections — that is, without the requirement that a person know his conduct was wrong or unlawful — everyday citizens can be held criminally liable for conduct that no reasonable person would know was wrong. This is not only unfair; it is immoral. No government that purports to safeguard the liberty and the rights of its people should have power to lock individuals up for conduct they didn’t know was wrong. Only when a person has acted with a guilty mind is it just, is it ethical, to brand that person a criminal and deprive him of liberty.

As I recently stated, and as Hatch reiterated this afternoon:

While sentencing reform addresses how long people should serve once convicted, mens rea reform addresses those who never should have been convicted in the first place—people who engaged in conduct without any knowledge of or intent to violate the law and which they could not have reasonably anticipated would violate a criminal law.

Hatch urged his colleagues to take up this important issue, pledging to work with them to include mens rea reform as part of an overall package on criminal justice reform. Let’s hope they take him up on that offer.