Far-Left Groups Are Inciting Violence Across Colombia, and the Media Is Providing Cover With a Disinformation Campaign 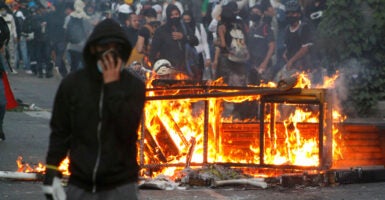 As far-left groups incite violence across Colombia, the media has been lying about what is really happening. Pictured: Protesters block the road and burn objects on May 19 in Medellin, Colombia. (Photo: Fredy Builes /Getty Images)

Julián Hoyos is a member of the Fundación Conciudadanos in Colombia and a Heritage Foundation Academy Fellow.

“They threw me to the ground [on the police station] and, without mercy, they began to beat and insult me … [then] a man stripped me of my uniform and sexually abused me and beat me.” These are the words of a police woman from Cali, one of the largest cities in Colombia, where violent protests have rocked the country for more than a month.

Thousands of roads have been blocked, causing the delivery of food, oxygen, and other necessities to be delayed or paralyzed.

There is a one-sided narrative abroad about what is going on in Colombia. But, to clarify, it is necessary to understand how we got here.

During the past six years, the radical left has lost the last three national elections, but has asserted its will nonetheless. In 2016, a faction of unelected bureaucrats negotiated a peace treaty with the Revolutionary Armed Forces of Colombia, known internationally as FARC—a terrorist group of guerrilla fighters that has fought with the Colombian government for years—and granted it impunity, political participation, and an outrageous indulgence to let it remain in the business of drug dealing.

The Colombian people voted to reject the peace treaty during a referendum. The “no” campaign won with more than 6 million votes, but it got implemented anyway.

A few days ago, one of the FARC leaders who benefited from the deal presumably got killed in Venezuela during gun fire between drug lords. The rest of the leaders are sitting today in Congress.

The Colombian people not only rejected this treaty, but ratified their decision by electing Iván Duque, who rallied against it, as president in 2018. With more than 10 million votes, Duque’s election received the highest turnout in Colombian history. In so doing, the Colombian people rejected the proposals of Duque’s opponent: far-left candidate—now senator—Gustavo Petro.

Petro needed an opportunity to strike back at his former opponent, and he got his chance after Duque’s government proposed a tax reform bill in March in response to high government spending due to the pandemic. The bill had many unpopular measures and lacked a political consensus in Congress before its publication. One can hardly think of a more suitable occasion to relaunch a presidential campaign against Duque than this tremendous mistake.

And so, Petro and his peers called for an “indefinite” national protest, although everyone knows it has a very defined endpoint: May 2022, the next presidential election. Each “Paro Nacional” protest has been ruinous for the country, and the protesters are using increasingly skilled strategies to disrupt life across the country.

As a concession to the mob, Duque removed his tax reform and health care reform proposals, and the minister of finance has resigned.

Today, the message is clear: If you cannot win through a democratic election, you can impose your view by force. However, the mob has received more than it expected, and yet it does not plan to stop.

This is not the worst part of this story. Making matters worse is the highly skillful misinformation warfare displayed by those who benefit from the violence. There are reports of more than 7,000 fake accounts created in Bangladesh being used specifically to disinform, frame videos of clashes between police officers and protesters, and sell the idea internationally that the government of Colombia is brutally killing civilians.

Sadly, many international organizations are buying into this misinformation campaign and using it to deter Colombian institutions.

Recently, the Inter-American Commission on Human Rights suggested that Colombian police authorities are using sexual violence as a form of controlling the public order. Just days after, the woman who denounced sexual abuse from the police during the protests admitted she lied once the attorney general revealed the inconsistencies between her story and the evidence.

Can the Inter-American Commission on Human Rights name any source for its claims besides the media?

The strategy these disinformation agents have used is to spread lies to incite violence, and then blame police officers for responding to the violence in order to intimidate them.

All this month, Colombian senators and well-known political figures have circulated false videos on Twitter of police officers burning banks, killing civilians, or misusing their power.

These protests are not hurting the president. The violence has claimed thousands of victims across the whole nation, and every leader who has helped to spread fake news is responsible. Why are all the so-called human rights advocates silent about the baby who died in an ambulance attacked by vandals and the policeman left fighting for his life after sustaining burns from a Molotov cocktail?

The international community has the right to know the truth about what is happening in Colombia.

Today, many local leaders are starting to call for the president to hear the victims of the protests and not just those willing to intimidate and impose their will through violence. Colombian democracy is being threaten, and the outcome will be measured by whether laws are dictated by the mob or by elected representatives.