Colombia Is Being Threatened by Leftist Violence. Biden’s Silence Is Deafening. 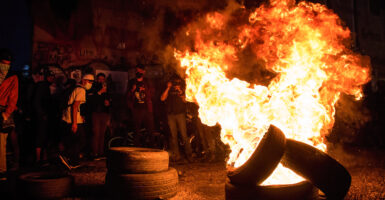 Protesters burn tires in the middle of the street during a demonstration at Plaza de Los Heroes (Heroes Square) in Bogota, Colombia, on May 19. (Photo: Antonio Cascio/SOPA Images/LightRocket/Getty Images)

Colombia, one of the United States’ oldest and most reliable allies in the hemisphere, has been rocked by political violence in the past few months aimed at destabilizing the country.

As the Center for a Secure Free Society reports, the government of democratically elected President Ivan Duque has been targeted by the same violent, narco-funded, Cuban- and Venezuelan-affiliated leftist guerrillas and terrorist gangs that have been seeking to overthrow democracy in Colombia for the past seven decades.

This latest eruption of deadly violence—in a country that has mourned tens of thousands of similarly needless deaths over many years—began on April 28.

Coming on top of the pandemic-crippled economy and high unemployment, the Duque government proposed tax increases that it says are needed to rebuild the economy. The BBC reports that the initial protests were triggered by the tax proposal, but quickly morphed into generalized anti-government rallies about a whole range of issues.

Amid unproven allegations of police brutality, those legitimate and peaceful protests turned violent—likely because the protests were manipulated and infiltrated by the shadowy and anti-democratic groups described in a recent Breitbart report.

Through their vicious tactics (including provoking the police), the now-deadly protests are eroding Colombia’s democratic stability and allowing drug trafficking to flourish.

Protesters are now blocking major highways, preventing the distribution of food and fuel throughout the country, according to the EFE news agency.

It’s costing the Colombian economy tens of millions of dollars a day in lost productivity, coffee exports, and other sales. The Duque government is taking action to remove the blockades, Reuters reported.

Under pressure from the American left (e.g., The Nation) to push Colombia once again toward dialogue with its implacable foes, the Biden-Harris administration unfortunately has not yet taken a high-profile stance in favor of protecting democracy through further technical assistance to Colombian military and law enforcement forces on the least harmful and most effective ways to quell the violence.

It was precisely that sort of U.S. technical assistance on security that worked so well when the U.S. implemented “Plan Colombia” during the prior episode of major lawlessness almost two decades ago.

The loss of Colombia to a leftist-populist government, or even to a regime put in place by Nicolas Maduro’s criminal gang in neighboring Venezuela, would be catastrophic for the United States.