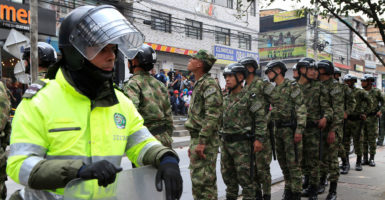 Ryan Carpenter is a member of the Young Leaders Program at The Heritage Foundation.

A hostage crisis in Ecuador recently came to a tragic end.

Two Ecuadorean journalists and their driver being held hostage were killed by their captors on April 12. The team was out on an assignment along the Colombia-Ecuador border when they were kidnapped on March 26 by a dissident faction of the recently demobilized FARC terrorist group, known in English as the Revolutionary Armed Forces of Colombia—People’s Army.

In order to secure the journalists’ release, the captors placed outrageous demands on Ecuador, including the release of FARC combatants and Ecuador’s promise to cease all counternarcotics cooperation with Colombia.

The dissident faction reportedly behind the attack is known as the Oliver Sinisterra Front.

In response to these killings, Ecuador’s president has vowed to expand security cooperation with Colombia.

At about the same time, a former lead negotiator of the FARC peace process was arrested in Colombia on charges of conspiring to smuggle $320 million worth of cocaine to the U.S. He was a high-ranking official in FARC and was due to become a member of the Colombian Congress.

Clearly, FARC’s continued criminal activities are not isolated incidents. They also appear to be symptomatic of a larger problem. While the majority of FARC recently demobilized, dissident elements continue engaging in criminality and terrorism.

The agreement is not without flaws—many of which directly affect U.S. national security. Illicit funds from FARC’s narcotics trafficking operations, $3.5 billion annually, remain unaccounted for. These funds may be used by dissident groups to continue narcotics trafficking or to corrupt Colombia’s government.

Colombia is the principal source of the cocaine headed for the U.S. It is also one of the U.S.’ most stalwart allies in Latin America, and it’s important that we ensure its stability and the validity of the peace process.

The U.S. has invested $10 billion in Colombia since 1999, and Colombia remains our largest recipient of foreign aid. We cannot forsake it now.

Yet these FARC dissidents, either with criminal or political objectives, threaten to undermine the implementation of the peace process.

There’s a probability that the pool of FARC dissidents could grow. Those within FARC who support the peace agreement have performed poorly in recent elections, receiving minimal support during their first electoral test in March. It seems the citizenry of Colombia is not supportive of the Marxist ideals perpetuated by the FARC candidates.

Among the Colombian voters who participated in the March election, the FARC candidates earned less than 0.4 percent of the vote for the Senate and less than 0.3 percent in the lower House.

In spite of the peace agreement, criminality associated with FARC will remain a problem for Latin America.

Policymakers should remain concerned about the danger posed by FARC dissidents and their potential to derail the implementation of the peace process. After ending 52 years of conflict, Colombia cannot afford to go back in time.