Debbie Wasserman Schultz Thinks Your Bonus Is No Big Deal 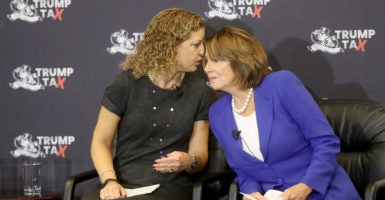 In the latest good economic news following the passage of tax cuts, Home Depot announced that it would be distributing up to $1,000 bonuses to hourly paid workers.

The list of companies now sharing the benefits of tax reform with employees is growing long.

In 2011, Democrats celebrated a temporary payroll tax cut that netted Americans about $40 per month. They even had a hashtag campaign on Twitter, #40Dollars.

But that was during the Obama presidency. Their tune has changed with Donald Trump in the White House.

“In terms of the bonus that corporate America receives versus the crumbs they are giving to workers to put the schmooze on is so pathetic,” Pelosi said in early January.

The median household income in Pelosi’s home district of San Francisco, California, is about $100,000, so it’s natural a $1,000 bonus would seem like peanuts to her.

She may be surprised to learn that nearly 7 in 10 Americans don’t even have $1,000 in savings, according to a recent study. So one can fairly conclude that a sudden $1,000 boost in one’s bank account would be a big deal for most people.

It’s an odd thing to hear Wasserman Schultz blame income taxes for diminishing the size of one’s bonus. After all, not a single Democrat in Congress voted in favor of tax cuts.

Certainly, this pessimism toward bonuses and pay raises can at least in part be chalked up to political partisanship. But there may be a deeper reason for their refusal to celebrate good economic news.

It’s the same reason that those who fiercely advocated a federal $15 minimum wage are now utterly dismissive of the significant benefits workers are now experiencing.

As The Daily Signal’s Fred Lucas recently reported, at least 21 companies voluntarily decided to raise their minimum wage to $15 an hour as a result of the tax break. This too received no recognition from liberal minimum wage backers.

The hard fact for progressives is that the economy now appears to be prospering despite their doomsaying, in large part thanks to the reduction in the overall government burden on society—or the expectation of further reduced burdens

As taxes have been reduced, regulations eliminated, and pro-energy policies embraced, Americans are starting to reap the real benefits of a great and unleashed American economy.

This is problematic for progressives who rely on the narrative that the average person can’t do well in life without them swooping in to help, without the government ensuring success.

It’s a rebuke of the “you didn’t build that” mentality of the Obama era that justified big government and redistributive policies based on the idea that the self-made man was a myth, and that free markets are simply exploitative.

It turns out that what Americans needed was not politicians to distribute goods from on high, but to ease up on weighty burden of taxation and regulation that had been strangling them.

Hopefully, this pro-growth pivot is a sign that more bonuses, raises, and jobs are on the way.

It would be nice, for once, if leading progressives would acknowledge the obvious and give credit where credit is due.