‘Gosnell’ Hangs On at Box Office Despite Obstacles 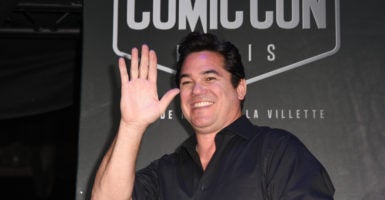 Actor Dean Cain, who stars in "Gosnell" as a police officer and is known for playing Superman in the TV series "Lois and Clark," attends a conference Saturday organized in his honor at Comic Con Paris 2018. (Photo: Mireille Ampilhac/Abaca/Sipa USA/Newscom)

The movie about Kermit Gosnell, the late-term abortionist in Philadelphia who went to prison after being convicted of the murder of three babies, briefly cracked the Top 10  at the U.S. box office but also continues to face what its producers call censorship.

“We have been banned, blocked, and attacked,” Phelim McAleer, who co-produced “Gosnell: The Trial of America’s Biggest Serial Killer” with his wife, Ann McElhinney, said in a statement Friday to The Daily Signal.

“The mainstream media refused to review the film despite a national release of a movie about a subject [abortion] that is a major political issue,” McAleer said. “NPR refused our advertising, Facebook has blocked our ads, and theaters yanked our film, even though it was a success.”

“Gosnell” has taken in an estimated $3.2 million and was on 467 screens as of Sunday, according to Box Office Mojo, which placed it unofficially at No. 18 among all movies in theaters.

A catholic priest tells his congregation to go and see Gosnell Movie https://t.co/mU6MjuyJ88

The movie tells the true story of Gosnell and how his 30-plus years as an abortion doctor ended in a case alleging multiple murders at his clinic, dubbed the “house of horrors.” Directed by Nick Searcy, the film stars Dean Cain, Earl Billings, and Michael Beach.

>>> Related: I Watched ‘Gosnell.’ Here Are My 5 Takeaways

Life Site News reported Tuesday that “movie theaters across the country are dropping and blocking ticket sales” for the movie “despite–or perhaps because of–the film’s success.”

Despite the challenges, McAleer said, the film has a profound impact on those who see it. He cites a report in LifeZette that a screening in California “led to its viewers helping one young local woman in changing her mind about getting an abortion.”

“Our movie has saved a life,” McAleer told The Daily Signal. “We are stunned and moved.”

The co-producer said the movie did not quickly wane in popularity.

“The film is also going from strength to strength–most movies see a massive drop-off in box office [of] 50-60 percent every week,” McAleer said Friday. “On Monday, for example, we had declined just 20 percent. Interest is growing not declining.”

So liberal site @Slate described #GosnellMovie as“gory”
1)I’ve seen the movie and it is certainly NOT gory or graphic in spite of reality of Gosnell’s house of horrors abortion clinic
2)Every abortion is gory because a baby is being killed,cut& thrown away https://t.co/aeoweTKdd7