I Watched ‘Gosnell.’ Here Are My 5 Takeaways. 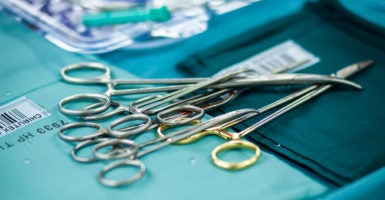 Kermit Gosnell, callous toward the women he operated on at his clinic, would use scissors to cut the spines of babies he delivered alive. (Photo: Anna Schroll/fotogloria/Newscom)

After I saw “Gosnell: The Trial of America’s Biggest Serial Killer,” I was disheartened—and at same time, incredibly thankful.

I’m thankful because finally, the horrific true story of Kermit Gosnell, the late-term Philadelphia abortionist who went to prison after being convicted in connection with the deaths of three babies, is being told.

But I’m depressed that such a story even exists.

This film puts a mirror to the face of society, showing in very real and compelling ways how abortion has wreaked pain and heartbreak on women in general, those who work in abortion clinics, and on our nation as a whole.

The movie, due in theaters Oct. 12, tells how Gosnell’s 30-year abortion career was halted and ultimately ended by an investigation and subsequent arrest, originally conducted to review illegal prescription drug sales, which led to discoveries of illegal abortion practices.

Gosnell was ultimately sentenced in May 2013 to life in prison without parole after being convicted of first-degree murder in the deaths of three babies born alive at his Philadelphia abortion clinic, Women’s Medical Society. He also was convicted of involuntary manslaughter, 21 felony counts of illegal late-term abortion, and 211 counts of violating an informed consent law.

>>> “Gosnell” comes out in theaters Oct. 12. Click here to see a list of theaters showing the movie.

Here are 5 takeaways I saw in the movie that speak to the culture’s attitude toward abortion.

The film, produced by Ann McElhinney and Phelim McAleer, paints a stark picture of what can happen when life is seen as disposable.

Gosnell is played by Earl Billings, known for “The Incredible Hulk”  and “Knight Rider.”

He displays a chilling indifference for unborn children. Lynda Williams, one of the nurses who worked in the clinic, said she saw Gosnell snip the necks of over 30 babies and that he sometimes put feet of fetuses in formaldehyde.

In one scene, a callous Gosnell is playing classical music on a cluttered, dusty piano, while law enforcement raid his home, looking for documents and other evidence after finding the feet of aborted babies stored in jars on shelves inside the clinic as well as bags containing parts of babies born alive at the clinic.

After questioning Gosnell as well as the clinic staff, law enforcement learned that he would then snip the necks of babies once they had been delivered.

During Gosnell’s trial, some dubbed the clinic a “house of horrors” because of its unsanitary and illegal conditions.

In the film, the character of Gosnell showed more concern for the well-being of turtles he kept in his waiting room, begging law enforcement to ensure that someone is tasked with caring for them after his arrest, than he did for the women who ended up contracting diseases from the unsanitary clinic conditions.

Davida Johnson, one woman who went to Gosnell’s clinic for an abortion, blames it for her contracting a venereal disease as well as for four miscarriages she subsequently had, the Associated Press reported.

And she was far from the only woman whose life was hurt by Gosnell.

Karnamaya Mongar ended up dying after being given an overdose of the pain reliever Demerol at Gosnell’s clinic, an NBC station in Philadelphia reported.

Perhaps the most culturally telling phrase in the whole film is when Sarah Jane Morris, the actress who plays Alexis “Lexy” McGuire, the assistant district attorney, is discussing with her son’s pediatrician the implications of investigating and prosecuting Gosnell.

The apprehensive pediatrician explaining to McGuire’s character why he thinks people are so hesitant to address any issue that has to do with abortion is indicative of the attitude of many in the country who do not want to address the injustices connected with abortion, such as the abortion industry’s targeting of African-American and minority communities.

McGuire’s steadfast pursuit of the Gosnell case, even when it was uncomfortable and difficult, is an appropriate reminder to pursue the truth in any given case, especially when it is unpopular and politically incorrect.

The film does a great job of making the horrific atmosphere of Gosnell’s clinic become real for its viewers, showing cats roaming the floors of the cluttered, filthy clinic staffed by nonmedical professionals, and, in at least one case, a minor.

Baldwin, whose mother, Tina, also worked at Gosnell’s clinic, said she helped Gosnell with abortions, and said she also witnessed Gosnell “snip” the necks of babies who were still moving after the abortion.

The release of Gosnell’s story to the big screens could not come at a more appropriate time, especially with growing prominence of the feminist movement, and how women who have been wronged by society are now being encouraged to speak out and share their stories.

It would behove all those who say they are feminists and who claim to care about women’s rights and well-being to share the story of Gosnell and memorialize the stories of women such as Mongar who died in his clinic.

The women who came out of Gosnell’s clinic, such as Johnson, who suffered multiple miscarriages after having an abortion at his clinic, and Gosnell’s nurses, such as Williams, who witnessed the doctor snip the next of babies born alive, deserve a space in the modern discussion of feminism.

Perhaps by broadening the conversation, women may come to find the vitalness of the stories they have been dismissive of and have a hand in building a society where each woman’s story is included and respected.