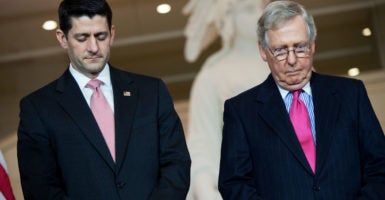 The Supreme Court of the United States recently declined to review two cases on prayer in public settings, leaving “in disarray” the law regarding the place of religion in the public square, to quote Justice Clarence Thomas.

The court has long made clear that it is in keeping with the principles of the Constitution to begin public sessions with prayer. The U.S. Court of Appeals for the 6th Circuit gave careful consideration to that history and found no constitutional conflict when lawmakers began their session by saying a prayer.

However, considering the same question, the U.S. Court of Appeals for the 4th Circuit arrived at the opposite conclusion.

Since the Supreme Court chose not to review either case, it leaves lawmakers—and their lawyers—outside the 6th Circuit wondering what they should do.

Thomas, joined by Justice Neil Gorsuch, wrote in dissent of the decision to deny review. He put a fine point on the confusion an unresolved circuit split will cause: “State and local lawmakers can lead prayers in Tennessee, Kentucky, Ohio, and Michigan, but not in South Carolina, North Carolina, Virginia, Maryland, or West Virginia. This court should have stepped in to resolve this conflict.”

There will, in all likelihood, be more cases in other circuits. As judges consider those cases, they should follow the lead of the 6th Circuit decision in Bormuth v. County of Jackson by not only recalling our rich history on the topic of legislative invocations, but by considering two important cases from the relatively recent past.

One of those is Marsh v. Chambers (1983), in which the high court ruled that a state legislature did not violate the Establishment Clause of the Constitution by opening sessions with a prayer led by a chaplain, even when that chaplain was paid with tax dollars.

The 6-3 majority opinion, written by Chief Justice Warren Burger, affirmed that “[t]he opening of sessions of legislative and other deliberative public bodies with prayer is deeply embedded in the history and tradition of this country. From colonial times through the founding of the republic and ever since, the practice of legislative prayer has coexisted with the principles of disestablishment and religious freedom.”

Thomas expressed it more succinctly: “For as long as this country has had legislative prayer, legislators have led it.”

It’s also important to note that the majority in Marsh framed the issue more broadly than simply the specific issue of publicly-paid chaplains. The court clearly affirmed the constitutionality of legislative prayer in general. “In light of the unambiguous and unbroken history of more than 200 years,” wrote the chief justice, “there can be no doubt that the practice of opening legislative sessions with prayer has become part of the fabric of our society.”

The second case to be considered is Town of Greece v. Galloway (2014), in which the court ruled that a town council did not violate the Establishment Clause by opening meetings with a faith-specific prayer led by a volunteer from the community. Writing for the majority, Justice Anthony Kennedy explained that “[t]he principal audience for these invocations is not, indeed, the public but lawmakers themselves, who may find that a moment of prayer or quiet reflection sets the mind to a higher purpose and thereby eases the task of governing.”

Put another way, far from being an attempt to coerce the public into prayer, legislative prayers led by local volunteers are expressions of faith meant for the legislators themselves. Or, as Thomas wrote in June, “The only real difference between this case and Town of Greece is the person leading the prayer.”

That is the essential issue. We know lawmakers may pay for a chaplain or invite a volunteer to say the prayer. And, at least in the 6th Circuit, the lawmakers themselves are welcome to offer the prayer, in addition to participating in those offered by others, whether voluntary or paid. Other circuits should follow that logic and reject the reasoning of the 4th Circuit.

Again, Thomas makes the point: “It is hard to see how prayers led by sectarian chaplains whose salaries are paid by taxpayers—a practice this court has upheld—could be less of a government establishment than prayers voluntarily given by legislators.”

The best person to say a prayer is the person for whom the prayer is intended—in this case, the public official. The 6th Circuit recognized that this tradition is in keeping with the values of our nation, its traditions, and the Constitution itself. We hope other circuits will follow their example.