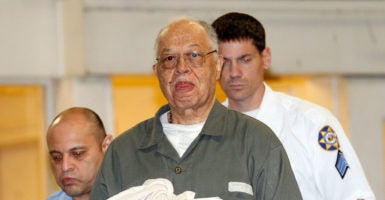 A movie about Kermit Gosnell, the late-term abortionist in Philadelphia who went to prison after being convicted in connection with the deaths of three babies, hit the Top 10 films at the box office over the weekend.

“We were [No. 10] on Friday and Saturday, but slipped back to 12 on Sunday,” Phelim McAleer, who co-produced the film with his wife, Ann McElhinney, said in a statement to The Daily Signal. “We are the No. 1 independent movie of the weekend and [No. 5] per screen average across the U.S.”

“This has been achieved despite the mainstream media virtually refusing to review the film, despite it opening nationally,” McAleer said.

The movie, “Gosnell: The Trial of America’s Biggest Serial Killer,” which opened in theaters Friday, tells the true story of Gosnell and how his 30-plus-year abortion career ended in a case alleging multiple murders. Directed by Nick Searcy, it stars Dean Cain, Earl Billings, and Michael Beach.

The film’s reception so far is not at all due to mainstream media coverage, Marjorie Dannenfelser, president of the pro-life Susan B. Anthony List, said in a statement provided to The Daily Signal.

The box office success of “Gosnell” is “a remarkable accomplishment, considering the filmmakers’ heroic struggle against bias and censorship to bring this life-changing, true story to audiences across America,” Dannenfelser said.

“We hope the mainstream media will finally be forced to reckon with the profound power of this film and give it the recognition it deserves,” she said.

Gosnell’s abortion business ultimately was ended as the result of an investigation, originally conducted to review illegal prescription drug sales but leading to discoveries of illegal abortion practices and his eventual arrest.

In May 2013, Gosnell was sentenced to life in prison without parole after being convicted of first-degree murder in the deaths of three babies born alive at his Philadelphia abortion clinic, the Women’s Medical Society.

Gosnell also was convicted of involuntary manslaughter, 21 felony counts of illegal late-term abortion, and 211 counts of violating an informed-consent law.

The movie, according to its website, “was one of the most successfully crowdfunded films in history.” The producers raised $2.3 million in 45 days from nearly 30,000 contributors.

Monica Burke, a research assistant at the DeVos Center for Religion and Civil Society at The Heritage Foundation, told The Daily Signal in an email that the movie tells a critical story the country should see.

“The recent Gosnell movie has brought to the forefront the horrors of the abortion industry,” Burke said, adding:

Moreover, this disturbing case shows that babies continue to be born alive and then killed after attempted abortions, or are purposely delivered alive and then left to die.

We still have more to do to protect women and children from such horrific abuse. Measures such as the Born-Alive Survivors Protection Act would provide criminal consequences for health care providers like Gosnell who violate current law and requires that proper medical care be given if a child is born alive.

Five years after Gosnell’s conviction, there is still work to be done to prevent against future abuse.

Searcy, the film’s director who is best known for acting roles in TV’s “Justified” and the miniseries “From the Earth to the Moon,” tweeted Monday: “If you want more movies that aren’t leftist Hollywood, you have to support them at the theaters.”

Too late. If you want more movies that aren’t leftist Hollywood, you have to support them at the theaters. If you don’t care what you get, don’t go. It’s as simple as that.

Others who have seen the film, which stars Billings in the title role, Cain as a police officer, and Beach as a prosecutor, took to Twitter to express their reactions.

We saw it yesterday and it was very well done. Very emotional and disturbing at the same time. Yet to this day the media continues to cover up these atrocities as they did back then…..no surprise though as it does not fit their agenda!

Excellent #prolife news! I am glad that @GosnellMovie did so well this weekend! Thank you @annmcelhinney for all your work! Planned Parenthood is afraid this movie will do well (and people will learn the truth) so encourage folks to go and watch! #teamlife https://t.co/4El4vLNwHr

Saw the movie Gosnell last night. Can't get it off my mind. Hope everybody will go see it. https://t.co/u0XyXO59yj https://t.co/fJe9MSKDow

Jeanne Mancini, president of the annual March for Life, said “Gosnell” has done well because it tells an unpopular but important story.

“The success of ‘Gosnell’ is a testament to American’s desire for the truth about abortion and the abortion industry,” Mancini said, adding:

Almost as disturbing as Gosnell’s ‘house of horrors’ is the corruption this movie exposes that allows gruesome, lethal practices to operate without regulation or surveillance.

We are thankful for the cast and crew’s courage in making this film and hope ‘Gosnell’ will open the door for a larger, more public conversation about the reality of abortion and the systems that promote it.