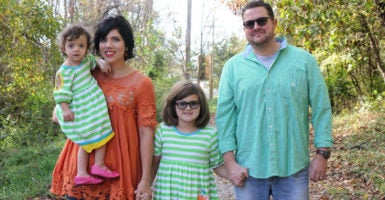 As House lawmakers plan to vote on a bill to protect survivors of abortion the same week as the March for Life, one abortion survivor says she hopes Congress passes the measure to save babies who are left to die.

“I survived my birth mother’s saline infusion abortion 40 years ago at St. Luke’s Hospital in Sioux City, Iowa,” Melissa Ohden, a survivor of a failed abortion in 1977, told The Daily Signal in an email.

“Although there were demands made to leave me to die in that hospital room that day,” she said, “ultimately a nurse rushed me off to the NICU [Neonatal Intensive Care Unit], because, in her words, I ‘just kept gasping for breath,’ and she couldn’t just leave me there to die.”

The annual March for Life takes place Friday as pro-lifers gather in Washington for a rally on the National Mall and a walk to the Supreme Court.

The bill would provide protections for babies born after an unsuccessful abortion procedure, granting them the same medical attention as babies born in any other situation, according to House Majority Leader Kevin McCarthy, R-Calif.

“Next week—the week of the annual March for Life when tens of thousands of Americans come to Washington to give voice to the voiceless unborn—the House will vote on the Born-Alive Abortion Survivors [Protection] Act,” McCarthy said in a statement obtained Jan. 9 by Townhall.

“This bill states simply that if a baby is born after a failed abortion attempt, he or she should be given the same medical care as a baby born any other way,” the No. 2 House Republican said.

McCarthy’s office did not respond to a request from The Daily Signal regarding the timing of the vote.

Ohden, 40, now married and the mother of two daughters, said the legislation would ensure that babies who survive abortions would not be left to die, as she was.

“Preborn children deserve equal protection under the law and immediate medical attention upon their survival,” she said in her email, adding:

No one’s life, no survivor’s care, should be dependent upon who is working that day. A law that clearly states that abortion survivors have equal protection and that there are legal consequences for abortionist’s failing to do so is important and necessary.

Melanie Israel, a research associate at The Heritage Foundation, wrote in a recent report that the legislation would reaffirm the original Born-Alive Abortion Survivors Protection Act that President George W. Bush signed into law in 2002.

“As the disturbing case of [Philadelphia abortionist] Kermit Gosnell has shown, babies continue to be born alive and then killed after attempted abortions or are purposely delivered alive and left to die,” Israel wrote.

“The Born-Alive Abortion Survivors Protection Act augments the 2002 law by providing for criminal consequences for health care providers who violate the law and requires that proper medical care be given by the health care practitioner present if an infant is born alive.”

Another survivor, Claire Culwell, whose twin was aborted, told The Daily Signal that action by Congress on the new bill is a “life or death” issue.

“I survived the abortion that was meant to take my life and successfully took the life of my twin,” Culwell said. “My daughter wouldn’t be here if I hadn’t survived. I can’t imagine life without her. Passing the Born-Alive Abortion Survivors Protection Act means that we’re protecting the lives of people like myself and my daughter.”

Tom McClusky, vice president of government affairs for the pro-life group March for Life Action, told The Daily Signal in a phone interview that lawmakers who vote against the bill should be seen as extremists.

“This is very simple,” McClusky said. “You are no longer talking abortion at this point; you are talking infanticide, since the baby is already born. So we wish the Senate would take it up as well.”

Jill Stanek, a registered nurse who is national campaign chairwoman for the pro-life Susan B. Anthony List, told The Daily Signal that her own experience in the medical field has illustrated the need for legislation to protect babies born during an abortion.

“I am a registered nurse and discovered in 1999 [that] at the hospital where I was working in the labor and delivery department was involved in late-term abortions, and the procedure that was used sometimes resulted in babies being aborted alive. And if they were aborted alive, they were shelved to die in the department’s toilet utility room,” Stanek said in a phone interview, adding:

One night, a co-worker was taking an abortion survivor, who had been aborted because he has Down syndrome and was between 21 and 22 weeks old, to the toilet utility room to die. And when she told me what she was doing, I couldn’t bear the thought of him dying alone, and so I rocked him for the 45 minutes that he lived. And all of that to say that I had personal knowledge of babies who would be saved by the born alive law.

Israel, who works at Heritage’s DeVos Center for Religion and Civil Society, said the legislation should not be a contestuous issue.

“In a civilized society, treating a baby born alive after an abortion with the same care that any other newborn baby would receive should not be controversial,” Israel said.