How Soros Used US Tax Dollars to Consolidate Power in Colombia 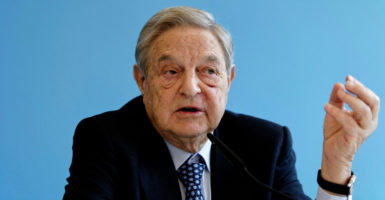 Liberal billionaire George Soros has used his Open Society Foundations to launch multiple left-wing political and media initiatives in Colombia, some of which have received grants from the U.S. Agency for International Development. (Photo: Caro/Heinrich/Newscom)

Lia Fowler is a columnist for Periodismo Sin Fronteras.

In a recent letter to Secretary of State Rex Tillerson, six U.S. Senators asked for an investigation into whether the United States Agency for International Development was promoting the Open Society Foundations’ left-wing policies abroad.

State Department career officials gave the senators the runaround, but if Tillerson does launch the probe, he need look no further than Colombia.

That South American country offers plenty of evidence that U.S. tax dollars are indeed being used to advance George Soros’ agenda—all under the banner of “peace.”

In November 2016, Colombian President Juan Manuel Santos signed a “peace agreement” with the Marxist narco-terrorist group FARC. Though Colombians had earlier rejected the deal in a plebiscite, Santos and the Congress—which his party controls—found a loophole to ratify it, placing it above the Constitution.

The effect of this is that Santos now virtually rules by decree, answering only to an oversight commission—a junta comprised of three terrorists, three Santos cronies, and a few foreign observers.

The separation of powers has been abolished and a new peace tribunal, known as the Jurisdiccion Especial para la Paz has replaced the nation’s courts.

This act to circumvent Colombia’s Constitution was supported by many outside interests, including Scandinavian countries and the Nobel Committee, which awarded Santos the Peace Prize.

Also supportive was the Obama administration—partly through USAID—and Soros-backed nongovernmental organizations, which jointly helped launder the image, atrocities, and fortune of the world’s leading cocaine cartel.

I asked a USAID official last month whether USAID and the Open Society Foundations were coordinating in Colombia. He answered: “USAID is not funding any activities with Open Society in Colombia, directly or through any past or existing mechanism.”

But just scratching the surface of USAID activities tells a different story.

For example, Verdad Abierta, a web-based portal created by Teresa Ronderos, director of the Open Society Program on Independent Journalism, boasts on its website that it receives support from USAID.

Abierta has helped rewrite Colombia’s history, elevating terrorists to the same level as the legitimate police and military forces, and rebranding decades of massacres, kidnappings, child soldiering, and drug trafficking by a criminal syndicate as simply “50 years of armed conflict.”

Fundacion Ideas para la Paz, once led by peace negotiator Sergio Jaramillo, now a member of the oversight “junta,” is funded by the Open Society Foundations and has received more than $200,000 in U.S. tax dollars.

The left-wing news portal La Silla Vacia, another Open Society initiative, also boasts of being a USAID grantee. Its columnist, Rodrigo Uprimny, whose NGO DeJusticia also partners with USAID and Open Society, is considered one of the architects of the peace deal. Leon Valencia, director of the Foundation for Peace and Reconciliation and former guerilla member, speaks at a March 2017 press conference to support the “peace agreement” reached between the government and FARC. (Photo: Leonardo Muñoz/Efe/Newscom)

The list goes on. I’ve written in a separate piece about the long history of collaboration between Soros-funded NGOs and the U.S. State Department to undermine Colombia’s institutions, particularly through the work of Human Rights Watch.

While terrorists are rewarded with unelected seats in Congress and impunity, those who combated them will either confess to crimes they haven’t committed or go to jail.

This leads to Soros’ crowning achievement: Of the five commissioners chosen to select the judges for the new peace tribunal, three are key players in Soros’ network.

Diego Garcia-Sayan is chairman of Open Society’s Global Drug Policy Program, Juan E. Mendez is a 15-year veteran of Soros-funded Human Rights Watch, and Alvaro Gil-Robles collaborated with Open Society on the issue of Roma rights, eventually leading to the creation of the European Roma Institute—a joint initiative of the Open Society Foundations and the Council of Europe.

I recontacted USAID with follow-up questions regarding all the above. The press office declined to answer any of them, but a spokesperson did amend the original statement: “USAID is not funding any activities through Open Society in Colombia.”

Take Chemonics. This USAID contractor received more than $20 million in 2015 alone. Some of that—USAID declined to say how much—went to formalizing relations between illegal miners in Segovia, Antioquia, and Gran Colombia Gold, the concession holder.

While the sustainability and benefits to the environment of the project are not clear (lawlessness in Segovia has intensified), certainly the company benefitted from a trained workforce not stealing its gold—albeit temporarily—courtesy of U.S. taxpayers.

One of the major shareholders of Gran Colombia Gold just happens to be Frank Giustra, a trustee of the Soros-funded International Crisis Group, along with Soros himself.

The six U.S. senators, then, are right to ask for a full accounting of USAID programs. Start with Colombia, where U.S. assistance should be for the purposes of maintaining and strengthening the gains from Plan Colombia.