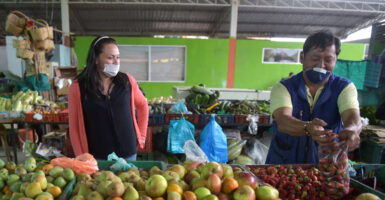 Colombia in late April became the 37th nation to join the Organization for Economic Cooperation and Development, successfully completing an accession process that began in 2013.

Although that multilateral organization is far from perfect, as several Heritage Foundation papers have noted, it remains the most significant international organization promoting the values of economic freedom.

Colombia’s economic freedom score is 69.2 (out of 100), making its economy the 45th-freest among 180 nations ranked in the 2020 edition of The Heritage Foundation’s Index of Economic Freedom. The South American nation is ranked fourth among 32 countries in the Americas, and its overall score is well above the regional and world averages.

Thanks to Colombia’s improved score in 2020, the possibility that its economy could eventually reenter the ranks of mostly free countries (overall score above 70) has increased. The last time Colombia was ranked mostly free was in 2016.

South America’s oldest democracy and its third-largest economy, Colombia is heavily dependent on exports of petroleum, coffee, and cut flowers.

Given the vital role of trade in its economy, it’s understandable that Colombia is a founding member of the Pacific Alliance and has free trade agreements with the U.S. and many other nations. Unfortunately, it also is the world’s top producer and exporter of cocaine.

Membership in the Organization for Economic Cooperation and Development should help to boost the government’s pursuit of additional (and needed) fiscal, constitutional, judicial, and other reforms that would improve judicial effectiveness and government integrity.

The judicial system, in particular, continues to be plagued by corruption, bribery, influence peddling, and abuse by insiders of privileged information.

In general, violence and corruption engendered by drug trafficking continue to erode judicial and other government institutions.

Growing political polarization and the increasingly negative impact of migration from Venezuela, however, are also making reforms more difficult to realize.

In addition, the economy has been adversely affected by a pandemic-related price drop for oil and other commodity exports.

The fact that about half of the labor force works in the informal economy has meant lower tax receipts for the government and diminished job prospects for workers in the formal economy.

In June, the International Monetary Fund reported that the Latin America and Caribbean region faces its largest recession on record, with the regional economy forecast to contract by 9.3% in 2020.

Though it doesn’t explicitly say so, it’s clear from the report that it’s the countries with the most economic freedom that are going to be able to respond effectively to the crisis.

For example, the International Monetary Fund notes that Chile, Peru, and Colombia have had the financial resources to be able to undertake emergency measures, such as wage subsidies and guarantees, and loans to ailing small and medium-sized enterprises.

All three of those countries rank in the top 10 for economic freedom in the Americas and in the top category for fiscal health. It is no accident, then, that their governments have additional resources with which to respond to the crisis.

As it continues to recover from the pandemic, Colombia has shown itself to be both resilient and committed to further reform.

As the newest member of the Organization for Economic Cooperation and Development, it can serve as a great example to other emerging nations of the benefits of greater economic freedom.