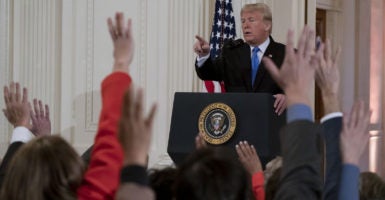 President Donald Trump picks his next questioner during his press conference Wednesday in the East Room of the White House. (Photo: Ken Cedeno/UPI/Newscom)

President Donald Trump put a positive light on the split results of Tuesday’s midterm election, which saw Democrats win back control of the House even as Republicans made gains in the Senate.

The president framed the outcome, in which Republicans increased their Senate majority while losing their House majority, as a “tremendous success.”

Trump compared the results to those under his predecessor, President Barack Obama, who saw Democrats lose 63 House seats and six Senate seats during his first midterm election in 2010.

“I thought it was very close to complete victory,” he said.

“This vigorous campaigning stopped the ‘blue wave’ that they talked about,” Trump said later. “I don’t know if there ever was such a thing, but could have been. If we didn’t do the campaigning, … there could have been. History really will see what a good job we did in the final couple of weeks.”

Trump said House Republicans who lost failed to embrace him during their campaigns. He called out by name Reps. Mike Coffman of Colorado, Mia Love of Utah, Barbara Comstock of Virginia, Carlos Curbelo of Florida, Peter Roskam of Illinois, Erik Paulsen of Minnesota, and John Faso of New York.

Regarding Utah’s Love, Trump said: “Mia Love gave me no love. And she lost. Too bad. Sorry about that, Mia.”

“Those are some of the people that decided for their own reason not to embrace—whether it’s me or what we stand for,” Trump said.

Trump said he supports House Minority Leader Nancy Pelosi, D-Calif., becoming House speaker again, even as many new House Democrats have pledged not to support her.

“If they give her a hard time, perhaps we will add some Republican votes,” Trump said. “She has earned this great honor.”

The president said those who thought he was being sarcastic, in an earlier tweet, about Pelosi deserving the speakership were wrong and that he was sincere.

Trump predicted: “We can do a tremendous amount of great legislation together.”

He also predicted the possibility of a “beautiful, bipartisan type situation” between the White House and House Democrats, and “much less gridlock.”

“Now we have a much easier path because the Democrats will come to us with a plan for infrastructure, a plan for health care, a plan for whatever they’re looking at, and we’ll negotiate,” Trump said.

Trump, who has had a strong pro-life record since becoming president, said the two parties could reach a compromise solution on abortion, which is perhaps the nation’s most polarizing issue.

“I won’t be able to explain that to you, because it is an issue that is a very divisive, polarizing issue,” Trump said.

“But there is a solution. I think I have that solution, and nobody else does. We are going to be working on that.”

CNN correspondent Jim Acosta asked Trump questions about the “caravan” of migrants headed to the U.S.-Mexico border and about the investigation into Russian meddling in the 2016 election.

After a back and forth, Trump was ready to move on to the next question. When a White House aide went to take the microphone, Acosta clutched it.

This prompted Trump to tell Acosta: “CNN should be ashamed of itself having you working for them. You are a rude, terrible person. You shouldn’t be working for CNN.”

NBC’s Peter Alexander, getting the next question, defended Acosta.

Trump responded: “Well, I’m not a big fan of yours, either.”

Acosta stood up to speak again without a microphone, and Trump said, “Just sit down, please.”

The president added: “When you report fake news, as CNN does a lot, you are an enemy of the people.”

When April Ryan of American Urban Radio, also a CNN contributor, tried to ask a question without being recognized, Trump told her: “Sit down, I didn’t call on you.”

During the election campaign, House Democrats vowed to leap into exhaustive investigations of Trump’s tax returns, his businesses, the Russia matter, and other issues.

Some House Democrats have called for impeaching Trump.

“They can play that game, but we can play it better, because we have a thing called the United States Senate,” Trump said. “I could see it being extremely good for me politically, because I think I’m better at that game than they are, actually, but we’ll find out.”

Trump added: “If they do that, then it’s just, all it is is a warlike posture.”

Trump said he won’t interfere in the Russia investigation by special counsel Robert Mueller, vowing that he will “let it go on.”

“I could fire everybody right now, but I don’t want to stop it because politically I don’t like stopping it,” Trump said.

“It’s a disgrace. It should never have been started, because there is no crime.”