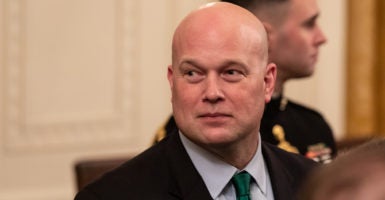 The three Democrats, who all serve on the Senate Judiciary Committee, filed a complaint in U.S. District Court for the District of Columbia claiming the president’s appointment of Whitaker was unconstitutional because the Senate didn’t have its advise-and-consent say in the matter.

The three senators are Richard Blumenthal of Connecticut, Sheldon Whitehouse of Rhode Island, and Mazie Hirono of Hawaii.

The lawsuit comes days after the Justice Department’s Office of Legal Counsel determined that Whitaker’s appointment was completely legal and constitutional, responding to earlier objections. It cited historical precedent for the interim appointment.

Attorney General Jeff Sessions resigned one day after the midterm elections, at the request of Trump. Trump named Whitaker, then Sessions’ chief of staff, to replace him on an interim basis.

Democrats immediately criticized the choice, citing comments Whitaker made as a CNN pundit, before joining the Justice Department in the fall of 2017, critical of the investigation by special counsel Robert Mueller into alleged collusion between Trump’s 2016 presidential election campaign and Russians.

Prior to joining the Justice Department last year, Whitaker—a former U.S. attorney for the Southern District of Iowa—was the executive director of the Foundation for Accountability and Civic Trust (FACT), a watchdog group known for targeting both Democratic and Republican politicians.

On Friday, the House Ethics Committee sanctioned Rep. Mark Meadows, R-N.C., chairman of the conservative House Freedom Caucus, based on a complaint that Whitaker filed on behalf of FACT in 2015.

“Installing Matthew Whitaker so flagrantly defies constitutional law that any viewer of ‘Schoolhouse Rock’ would recognize it,” Blumenthal said in a statement. “Americans prize a system of checks and balances, which President Trump’s dictatorial appointment betrays.”

Blumenthal was referring the long-running animated musical series of short educational films and videos on ABC TV for children on civics and other subjects. “How a Bill Becomes a Law” is one of the series’ best-known episodes.

“President Trump is denying senators our constitutional obligation and opportunity to do our job: scrutinizing the nomination of our nation’s top law enforcement official,” Blumenthal added.

However, Steven Engel, assistant attorney general and head of the Office of Legal Counsel, on Nov. 14 wrote a 20-page opinion asserting that the Whitaker appointment was entirely legal based on “Supreme Court precedent, by acts of Congress passed in three different centuries and by countless examples of executive practice.”

“In that year, Congress authorized the president to ensure the government’s uninterrupted work by designating persons to perform temporarily the work of vacant offices,” Engel wrote.

The opinion stated that in at least 160 instances since 1860, officials not confirmed by the Senate have temporarily performed the duties of officials in significant positions within the State Department, Treasury Department, and Interior Department.

“Mr. Whitaker’s designation is no more constitutionally problematic than countless similar presidential orders dating back over 200 years,” the opinion said.

The state of Maryland also filed a lawsuit to keep Whitaker from serving in the role.

“The stakes are too high to allow the president to install an unconfirmed lackey to lead the Department of Justice—a lackey whose stated purpose, apparently, is undermining a major investigation into the president,” Whitehouse said in a statement about the Senate Democrats’ lawsuit. “Unless the courts intercede, this troubling move creates a plain road map for persistent and deliberate evasion by the executive branch of the Senate’s constitutionally mandated advice and consent.”

“We want the court to make clear that the Senate must confirm Matthew Whitaker’s appointment as acting attorney general; otherwise, this temporary appointment violates the Constitution’s Appointments Clause,” Hirono said in a statement. “Without exception for President Trump’s allies, principal officers who report directly to the president must be subject to a hearing and confirmed by the Senate.”