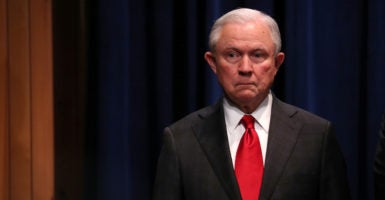 Sessions, a former Alabama senator and early Trump supporter who angered the president by recusing himself from the investigation into Russian meddling in the 2016 election, had been expected to go sometime after the midterm elections Tuesday, if not so soon.

Clearly, the President has something to hide. https://t.co/m1sQV9oBwl

Given his previous comments advocating defunding and imposing limitations on the Mueller investigation, Mr. Whitaker should recuse himself from its oversight for the duration of his time as acting attorney general.

At the time, Whitaker was a contributor to CNN, paid to give his legal opinions on current events on air and in written commentary.

“It does not take a lawyer or even a former federal prosecutor like myself to conclude that investigating Donald Trump’s finances or his family’s finances falls completely outside of the realm of his 2016 campaign and allegations that the campaign coordinated with the Russian government or anyone else,” Whitaker wrote. “That goes beyond the scope of the appointment of the special counsel.”

The previous year, while running the Foundation for Accountability and Civic Trust, Whitaker called for the Obama administration to appoint a special counsel to investigate Hillary Clinton’s use of a private email server to conduct official business while secretary of state.

Trump repeatedly clashed with Sessions, publicly complaining since last May that he should not have recused himself and blaming him for appointment of a special counsel.

There was nothing inappropriate about Sessions’ expected departure, said Sidney Powell, a former federal prosecutor from Texas who was chief of appellate divisions in two districts.

“The president is entitled to ask the attorney general or any Cabinet member he wants to resign,” Powell told The Daily Signal. “We all saw this coming. This came about 36 hours faster than I expected.”

She noted that because Sessions had recused himself from the Russia probe, it would be impossible to make a credible claim that Trump’s move to push him out was to obstruct an investigation.

“I hope the new AG clearly doesn’t have any conflict of interest and can start doing a lot of things that need to be done such as enforcing immigration laws, reopening the Clinton email investigation, and taking Clorox and a firehose to the Justice Department,” Powell said.

During a press conference Wednesday, shortly before his announcement of Sessions’ departure, Trump said he would not interfere in the special counsel’s investigation.

“I could fire everybody right now, but I don’t want to stop it because politically I don’t like stopping it,” he said. “It’s a disgrace. It should never have been started, because there is no crime.”

Trump announced the replacement of Sessions in a tweet.

We are pleased to announce that Matthew G. Whitaker, Chief of Staff to Attorney General Jeff Sessions at the Department of Justice, will become our new Acting Attorney General of the United States. He will serve our Country well….

….We thank Attorney General Jeff Sessions for his service, and wish him well! A permanent replacement will be nominated at a later date.

In his undated but signed resignation letter to Trump, Sessions wrote: “At your request, I am submitting my resignation.”

The letter goes on to talk about the Justice Department’s crackdown on violent crime and illegal immigration under his watch.

BREAKING: “At your request, I am submitting my resignation,” Jeff Sessions writes to Pres. Trump. https://t.co/MjN32KAUXh pic.twitter.com/7BesrhH7cj

Sessions, 71, left the Justice Department around 5:30 p.m., shaking some hands outside and raising a hand to acknowledge applause from agency employees, including Whitaker, before getting into a car and departing.

Jeff Sessions served his country and the Department of Justice with distinction as the 84th Attorney General of the United States. Although he had a rocky relationship with President Trump, he brought many welcome changes to the Department during his tenure, including a renewed emphasis on fighting violent crime, illegal immigration, and the drug epidemic.

“Jeff Sessions has dedicated his life to public service as attorney general, senator, and U.S. attorney,” James said in a prepared statement, adding:

I am grateful for his many years of public service and his unwavering fight to preserve liberty in this country. During his time at the Department of Justice, he focused on priorities important to the American people, including strengthening our borders, protecting religious liberty and freedom of speech, and improving public safety. On behalf of The Heritage Foundation, I would like to thank my friend, General Sessions, for his commitment to upholding the rule of law and the Constitution.

President Trump just removed Jeff Sessions. He wants an Attorney General to serve his interest, not the public.

Mueller’s investigation and the independence of the DOJ must be protected. Whitaker and any nominee must commit to doing both.

We will protect the rule of law.

President George W. Bush nominated Whitaker and the Senate confirmed him to serve as U.S. attorney for the Southern District of Iowa in 2004.

Whitaker continued to serve in the position through the first 10 months of the Obama administration. He was among federal prosecutors serving on the Attorney General’s Advisory Committee of U.S. Attorneys.

After a stint in the private sector, in October 2014, Whitaker served as the first executive director of the Foundation for Accountability and Civic Trust. FACT investigated public corruption, and in early 2016 called for the Obama administration to name a special counsel to look into Clinton’s use of the private email server.

In October 2017, Whitaker left FACT to join the Justice Department as Sessions’ chief of staff.

Whitaker unsuccessfully ran as a Republican candidate for U.S. Senate from Iowa in 2014 and for Iowa state treasurer in 2002. Before going into politics, he was on the football field as a tight end for the University of Iowa Hawkeyes.