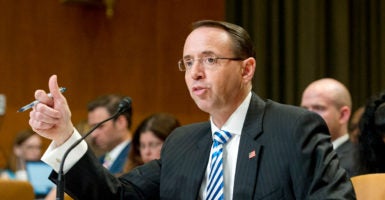 “We must restrain ourselves from assuming authority beyond our lawful [place],” said Deputy Attorney General Rod Rosenstein at an event at The Heritage Foundation Sept. 14. (Photo: Ron Sachs - CNP/Sipa USA/Newscom)

The Constitution’s 230th anniversary is  Sept. 17, and Deputy Attorney General Rod Rosenstein says it is incumbent on the American people to help preserve the rule of law as the Founders intended.

“On Constitution Day, it is appropriate to keep in mind that although the power of the federal government is vast, it is expressly limited, and those who are entrusted with the exercise of federal authority must be energetic in enforcing the law,” Rosenstein said at an event at The Heritage Foundation Thursday.

The challenge, nearly two centuries later, Rosenstein said, is to stay within the confines the Constitution dictates.

“We must restrain ourselves from assuming authority beyond our lawful [place],” Rosenstein said. “Our power is limited by law, and we are obligated to respect those limits, even when no one objects.”

Another challenge, Rosenstein said, is communicating to society the importance of the Constitution.

“Unfortunately, too few American citizens know the details of our Constitution,” Rosenstein said. “And some discount the rule of law. If you ask whether a particular legal decision is right, most of the citizens focus on whether they favor the policy outcome.”

Rosenstein, who assumed office as the 37th United States deputy attorney general on April 26, recounted a story about how Benjamin Franklin, a signer of the Constitution, warned about the struggle future Americans would have staying true to the Founders’ vision.

As the story is told, Franklin was walking home from the Constitutional Convention when he encountered a woman named Mrs. Powell who asked Franklin what kind of government the Founders had created.

“And Franklin replied with these words, ‘A republic, madam, if you can keep it,’”  Rosenstein said. “Mrs. Powell’s question illustrates that it was not inevitable that our nation would begin as a democratic republic.”

Ordinary citizens play a significant role in preserving the role of the Constitution as the Founders saw it.

“The rule of law is not just about words on paper. The rule of law is about the character of the people who are charged with enforcing the law,” Rosenstein said. “If they uphold it faithfully, the result will be a high degree of consistency and uniformity. Those features are among the primary reasons why our nation has flourished.”

The Justice Department has a unique role in upholding the Constitution and the rule of law, Rosenstein said.

“The Department of Justice does not choose sides because of the identity of a party,” the deputy attorney general said, adding:

We do not enforce the law among some people, and ignore others based on our own biases, or any other inappropriate considerations. We follow mutual principles. The point of the rule of law is to maintain a fair and rational system, characterized by impartiality and universality. That is, it applies equally to each person.

The task sounds simple, Rosenstein said, yet it remains a detailed process.

The task of a good prosecutor is “to select cases for prosecution, and to select those for which the offense is the most flagrant, the public harm the greatest, and the proof almost certain.”

Such … power calls for the exercise of discretion and the wise use of that discretion. So when asked, ‘Why did you prosecute this case?’ it will not do for the prosecutor to respond, ‘Because I can’ or ‘Because I must.’ The right answer is, ‘Because I should.’ The task of enforcing the law is not devoid of discretion.

The event, “A Constitution Day Address,” was hosted by Edwin Meese III, who served as the nation’s 75th attorney general and is The Heritage Foundation’s Ronald Reagan distinguished fellow emeritus.

Rosenstein praised Meese’s role in upholding the Constitution during his service in the Reagan administration.

“General Meese famously told the American Bar Association in 1985, ‘We will peruse our agenda within the context of our written Constitution of limited and energetic powers,’” Rosenstein said, adding: