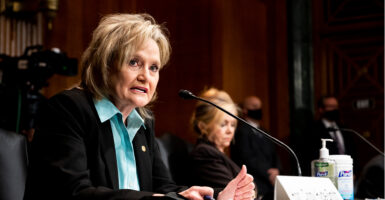 Supporters and opponents argued in a Senate hearing Wednesday over a bill that would make gender identity and sexual orientation protected characteristics under federal civil rights law.

The Senate Judiciary Committee, chaired by Sen. Dick Durbin, D-Ill., spent over three hours listening to witnesses’ testimony and arguments for and against the legislation, called the Equality Act.

“Everyone should be treated with dignity and respect,” Sen. Chuck Grassley, R-Iowa, the committee’s ranking member, said in his opening remarks. “But the Equality Act, I strongly suspect, … would actually dictate what women, girls, schools, churches, doctors, and others must believe.”

During the hearing, called “The Equality Act: LGBTQ Rights Are Human Rights,” conservative lawmakers argued that the Equality Act, also known as HR 5, would infringe upon religious freedom and other rights of parents, women, and children.

Senators on the political left pushed back on these arguments, claiming that HR 5 simply would prohibit discrimination on the basis of sexual orientation or gender identity.

Here are four highlights from the hearing.

President Joe Biden has said passage of the Equality Act is one of his top priorities during his first 100 days in office.

In a Feb. 19 statement, Biden urged Congress to pass the Equality Act “because no one should ever face discrimination or live in fear because of who they are or whom they love.”

Two panels of witnesses testified before the Judiciary Committee, answering a litany of questions from its members. The first panel was composed solely of senators and representatives; the second was made up of activists.

Opponents argued that the bill’s title is misleading and in fact the legislation would harm the equality that women spent decades fighting for.

The Equality Act is “misnamed because although this act supports the prevention of discrimination, it actually causes it by undermining hard-fought protections for women,” Sen. Cindy Hyde-Smith, R-Miss., said.

By expanding the definition of sex under federal law to include gender identity and sexual orientation, the Equality Act stands to eliminate women-only spaces such as locker rooms, restrooms, sororities, and sports teams, Hyde-Smith said.

Gender ideology is at the heart of the bill and is “misogyny  in progressive clothing,” said Abigail Shrier, an independent journalist and author of the book “Irreversible Damage: The Transgender Craze Seducing Our Daughters.”

The Washington Corrections Center for Women in Gig Harbor, Washington, recently implemented a policy to house prisoners by gender identity. Some men transferred to the women’s prison, and “one of the inmates raped a female in the women’s prison upon arrival,” Shrier said.

The Equality Act would allow this same scenario to be repeated in states across the country, she said, because the bill doesn’t define or restrict who is to be considered a transgender person. She said that by allowing any biological male who says he identifies as transgender to enter women-only spaces, the proposed law would give men with violent intentions the opportunity to victimize women.

Shrier provided the Judiciary Committee with a sober warning as she concluded her testimony:

For generations, women like the late Justice Ruth Bader Ginsburg fought to create sex-based protections to make life safe and fair for women. If you vote to take away those rights, don’t pretend you have achieved a civil rights victory. In the name of inclusivity, you will have made life far less safe, far less fair, and far less inclusive for America’s women and girls.

Advocates of the Equality Act argued that the legislation would not have negative implications for women’s sports or religious institutions, but simply would provide equal protection under the law.

“We need the Equality Act to set all of our people free,” Alphonso David, a gay man who is president of the Human Rights Campaign, which calls itself the nation’s largest LGBTQ rights organization, said in opening remarks.

At the end of the day, David said, “all we are asking for is the same protections under law that should be guaranteed to every single person in this nation.”

Stella Keating, 16, of Tacoma, Washington, is a transgender student who founded The GenderCool Project, which says it highlights positive stories about transgender and nonbinary youth.

Keating shared aspirations and why passage of the Equality Act would make those aspirations more possible:

I represent America’s future. We are the next generation of small business owners. Software engineers. Scientists. Teachers. Nurses. Presidents. And for my generation to achieve all that we will, we just need to be able to live our lives. …

I hope that our time together has helped show you why passing the Equality Act will have such a significant, positive impact not only on the lives of kids like me but on the future of our country.

Durbin drew parallels with the fight for racial equality in America, women’s right to vote, and protections for disabled persons.

3. Women and Girls Only Ones ‘Asked to Bear This Risk’

“It is none of government’s business what consenting adults do in their own bedrooms,” Sen. Ted Cruz, R-Texas, said, adding:

It is none of government’s business the sexual orientation or gender identity of adults in their own lives. But this bill is not about that. This bill is about mandating that biological males should be allowed to compete in girls sports and women’s sports, effectively repealing Title IX.

Title IX is the federal civil rights law that protects individuals from discrimination on the basis of sex, including in education opportunities.

The unfairness of the Equality Act is highlighted in a flawed assumption that “girls can take it,” Shrier said.

“They can give up a few trophies. Come on. They can handle the risk,” she said, with a slight tone of exasperation.

But the reality is that there “is only one group that is asked to bear this risk,” Shrier said. “It is always women and girls. No boys will suffer because biological girls enter their sport. But girls will lose material opportunities.”

The Human Rights Campaign’s David was quick to push back on the arguments made by Shrier and others, asserting that the Equality Act would not infringe on the rights of women.

“The contention that providing these protections to LGBTQ people in some way will resut in the sky falling, will compromise women’s rights, is not true,” David said.

And if it were true, he said, “we would have seen it in the states … , just like Connecticut, … that have had nondiscrimination laws [on] the books for decades.”

When Cruz questioned her later in the hearing, Shrier noted that in Connecticut, two biological boys who identify as females took 13 out of 14 high school championship track and field titles in 2019.

4. ‘Where No Federal Law Has Gone Before’

The Equality Act would redefine sex as something that is self-defined, testified Mary Rice Hasson, the Kate O’Beirne fellow in Catholic studies at the Washington-based Ethics and Public Policy Center.

“Biological sex matters in law, medicine, and for many of us, in the practice of our faith,” Hasson said. “The Equality Act goes where no federal law has gone before.”

The bill threatens religious organizations by removing protection provided by the Religious Freedom Restoration Act of 1993, a federal law also known as RFRA, Hasson warned in her opening statement.

Supporters were quick to deny that the Equality Act would infringe upon the free practice of religion. When questioned by Sen. Cory Booker, D-N.J., about the implications for religion, David said the legislation would not impede religious institutions.

The act “does not create any new obligations, or change how houses of worship define their own religious beliefs, how they are organized, or how they determine membership,” David said.

Much of the debate about the Equality Act’s effect on religious institutions centered on the Religious Freedom Restoration Act.

RFRA, signed into law by President Bill Cinton, a Democrat, ensures that the interests of religious freedom, including hiring those of like beliefs, are protected.

But the Equality Act essentially would prevent religious institutions from “having recourse” to the protection the earlier law provides, Hasson said.

If passed, the Equality Act would prohibit discimination on the basis of sexual orientation and gender identity within “places of public accommodation,” which, in a break with legal tradition, would include churches, mosques, temples, and other places of worship.

The bill opens the doors for places of worship to be “subject to discrimination suits because they are now going to be considered public accommodation in the same way as a [sports] stadium,” Hasson said.

Hasson added that, as currently written, the legislation “ties the hands of religious believers and says, ‘You are not welcome to live your faith in the public square.’”