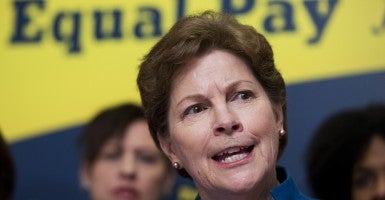 Breitbart News reporter Matthew Boyle was removed, without explanation, from a campaign event for Sen. Jeanne Shaheen in Exeter, N.H., yesterday despite the event having been advertised as a press conference open to media.

According to Boyle’s account, campaign staffers for the Democratic senator checked Boyle in and directed him to the back of the room where he gathered among other reporters.

Soon after, Boyle was approached by a staff member and the owner of ReVision Energy, a local renewable energy company at which the event was held, who asked Boyle to leave and claimed the event was not open to the public.

Boyle responded by explaining that he’s “a congressionally credentialed Capitol Hill reporter” through the U.S. Senate press gallery, before doing as requested and exiting the event.

At the event, Shaheen received the endorsements of the League of Conservation Voters Action Fund and the Sierra Club, two green groups that praised her work to “combat climate change.”

“We are in a new era of media where large and influential news outlets treat Democrats much like the mainstream media has always treated Republicans: with a healthy skepticism,” Marlow told The Daily Signal. “The First Amendment gives us freedom of the press, but apparently Senator Shaheen believes that right only applies to publications sympathetic to her agenda. This should be troubling not only to conservatives, but to anyone who values the free flow of ideas.”

The Daily Signal reached out to Shaheen campaign spokesman Harrell Kirstein for comment. Kirstein initially claimed to be unaware of Boyle’s removal and asked The Daily Signal to provide an account of what happened. Upon doing so, he did not respond.

Shaheen, elected to the Senate in 2008, is locked in a close race with former Sen. Scott Brown.