Lawmaker Works to Save Taxpayers’ Money With New Energy Bill 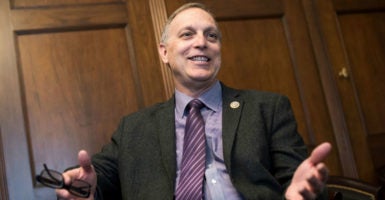 An Arizona congressman is working to remove energy subsidies that are part of the 2014 farm bill.

Rep. Andy Biggs, R-Ariz., recently released legislation that he says could save the American taxpayer more than a billion dollars over five years.

Biggs told The Daily Signal in an interview that he wants his bill “to actually roll back and repeal these subsidies set in place.”

The subsidies “cost taxpayers, in direct costs, probably about $1.3 to $1.4 billion over the next five years,” Biggs said.

The 2014 farm bill funded special interests for agriculture, 80 percent of which was funding for food stamps, The Daily Signal previously reported.

Nick Loris, an energy and environmental policy analyst at The Heritage Foundation, told The Daily Signal in an interview that these subsidies are unnecessary because successful programs should not need extra money.

Our whole argument is that if these things are competitive, they don’t need subsidies in the first place and more importantly than that, it creates a dependence on the government subside and they don’t ultimately recognize the true price point at which they are cost competitive with other  sources of energy.

The proposed legislation would repeal all Department of Agriculture biofuel and energy subsidy programs that are part of the 2014 farm bill.

Some of these programs include the Biomass Research and Development Initiative, Feedstock Flexibility Program for Bioenergy Producers, Biomass Crop Assistance Program, and Community Wood Energy Program.

“Over the years, federal policies have blocked access to opportunities, unnecessarily delayed projects, mandated expensive energy production, restricted choice, and given handouts to politically connected energy technologies,” Loris said in a statement for Heritage Action for America, the lobbying arm of The Heritage Foundation. “Politicians tout these programs as a way to usher in new technologies that will provide jobs and stimulate the economy.”

Biggs said he hopes his legislation gets through Congress by the end of the year.

“I recognize that we may have an uphill battle because there are a lot of agriculture guys that are going to be swayed by their constituents who benefit directly from this, from the government payments,” Biggs said. “So, the timeline is when, we get back [to Washington, D.C.] in September, is for me to keep pushing … and see if we can get something done by the end of the year.”