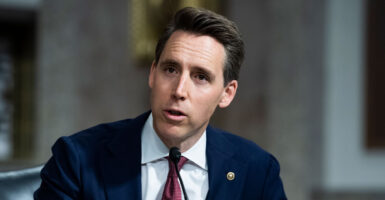 Sens. Josh Hawley of Missouri, Mike Lee of Utah, and Ted Cruz of Texas filed the brief in Dobbs v. Jackson Women’s Health Organization, which the high court is scheduled to hear beginning in October. The three called on the court to revisit its rulings in Roe v. Wade and Planned Parenthood of Southeastern Pennsylvania v. Casey.

The senators pushed the court to return questions of abortion legislation to the states and challenged the Supreme Court’s abortion jurisprudence as unconstitutional.

Where a legal doctrine has repeatedly failed to offer clarity—where it has proved unworkable in the past and will likely engender unpredictable consequences in the future—its existence constitutes an open invitation to judges to interpret it according to their own policy preferences, usurping the constitutional prerogatives of the legislature.

“Roe and Casey should be overruled,” the three senators continue, “and the question of abortion legislation should be returned to the states.”

Dobbs will be the first major abortion case in which all three of former President Donald Trump’s Supreme Court appointees participate, including Justice Amy Coney Barrett, who gained a seat on the court after a contentious confirmation process in October.

At issue is the question of whether all previability bans on abortions are unconstitutional.

The case deals with a 2018 Mississippi law banning abortions after 15 weeks, a law challenged by the Center for Reproductive Rights; the law firm Paul, Weiss, Rifkind, Wharton & Garrison; and the Mississippi Center for Justice on behalf of the last remaining abortion clinic in Mississippi—Jackson Women’s Health Organization.

An unborn baby is considered viable at 24 weeks, though medical intervention and a stay in the neonatal intensive care unit are usually required this early. Babies born before 23 weeks have a survival rate of about 5% to 6%, and analysis by Charlotte Lozier Institute medical experts found that unborn babies can feel pain as early as 12 weeks.