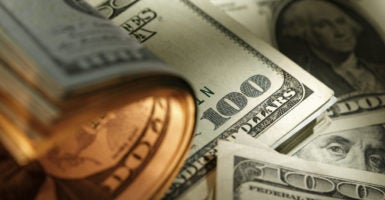 The United Mine Workers of America has promised its members $5.6 billion more in pension money than it can pay. (Photo: iStock Photos)

As Congress closes up shop for 2016, a group of four Democratic senators is determined to “use whatever means necessary” to secure a special-interest taxpayer bailout for the United Mine Workers of America union.

According to the senators, those “means” will include “blocking other bills” until the bailout is secure.

The UMWA represents roughly 100,000 active and retired coal miners. After decades of failing to set aside sufficient funds to keep the promises it made, the UMWA’s members are on track to see their pension benefits reduced when the union’s plan becomes insolvent around 2025.

Never before in history has the U.S. government bailed out a private pension plan. That’s because bailouts encourage more of the same reckless behavior that led to the bailout in the first place. If the federal government forces taxpayers to back up the promises made by private companies or unions, what incentive will those plans have to make good on their promises?

If these senators—Joe Manchin, W.Va.; Sherrod Brown, Ohio; Bob Casey, Pa.; and Mark Warner, Va.—are successful in their stand to shift the UMWA’s $5.6 billion in broken pension promises onto taxpayers, they will set a precedent for future senators and members of Congress to do the same for failing pension plans in their states and districts.

Next up will be the Central State Teamsters—a trucking union representing nearly 400,000 active and retired workers across dozens of states and hundreds of congressional districts. It has promised $36 billion more in pension benefits than it can afford to pay and it will become insolvent at about the same time as the UMWA plan, around 2025.

But that’s nothing compared to public-sector state and local pension plans, which owe an estimated $5.6 trillion in unfunded pension promises. A private-sector pension bailout would all but ensure a public sector one as well.

After all, if sympathy for retired mineworkers trumps the fundamental principles of good governance, how will Congress not also grant taxpayer bailouts for the unfunded pension promises made to firefighters, police, and teachers?

If the stand being made by these four senators for a UMWA bailout is successful, so too will be countless future bailouts for special-interest pensions, both in the private and public sectors. What begins as a $5.6 billion side deal could soon become a $6 trillion bailout of pensions across the country.