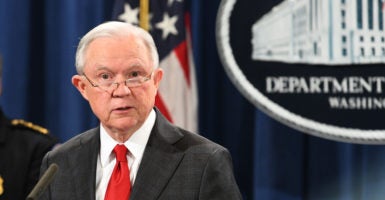 The Florida man arrested Friday in connection with 14 suspicious packages sent to Democrat politicians and other public figures has been charged with five federal crimes and faces up to 48 years in prison, Attorney General Jeff Sessions said.

Cesar Sayoc Jr., 56, from the Miami suburb of Aventura, was charged with threats against former presidents and  other persons, illegally mailing explosives, interstate transportation of an explosive, threatening interstate communications, and assaulting former and current federal officers.

“This is a law-and-order administration,” Sessions said at a news conference at the Justice Department that also featured other senior law enforcement officials.  “We will not tolerate such lawlessness, especially political violence.”

Sessions noted that the charges against Sayoc may change or expand as the investigation proceeds.

“This is utterly unacceptable. Political violence or the threat of violence is antithetical to our vigorous system of self-government,” the attorney general said.

THE TRUMPMOBILE WAS HIS HOME: Bomb suspect Cesar Sayoc had been kicked out by his parents, so he was currently living in the van – CNN pic.twitter.com/L9tmkrTAL7

FBI Director Christopher Wray said the intercepted explosive devices, or IEDs, were meant to be set off, addressing speculation that the devices perhaps were meant only to scare the addressees. Each device, Wray said, contained 6 inches of PVC pipe, a small clock, a battery, wiring and explosive material.

“Though we’re still analyzing the devices in our laboratory, these are not hoax devices,” Wray said.

Asked by a reporter why Soyac targeted Democrats, Sessions said: “I don’t know, other than what you might normally expect. He appears to be a partisan.”

USA Today reported that Soyac, a registered Republican, has a string of arrests dating to 1991 for alleged theft and drug offenses and traffic infractions. The New York native was arrested in Palm Beach on retail theft charges in May 2015 and  found guilty that October, records show.

Sayoc filed for bankruptcy in 2012, USA Today reported. The newspaper said he lived with his mother at the time and owed more than $20,000 to banks and other creditors, according to records.

Trump, speaking earlier Friday to a group of young black Americans in the East Room of the White House, announced the capture of the suspect, whom he did not name.

“I am pleased to inform you that law enforcement has apprehended the suspect and taken him into custody,” Trump said, to applause. “It’s an incredible job by law enforcement.”

Trump thanked the FBI, the Justice Department, and other federal and state agencies for their quick action and results.

“We have the best, and they just showed it,” he said.

None of the devices reached their targets or detonated, even after bumpy rides in the postal system.

Wray said the FBI responded to the explosive packages with “every resource we’ve got” and identified Sayoc as the suspect by matching fingerprints found on the package sent to Waters.

Each official who spoke at the Justice Department news conference lauded the coordinated efforts of law enforcement that conducted operations across the country, including New York, California, Maryland, Delaware, Washington, D.C., and Florida, where the suspect was arrested and taken into custody by the FBI.

Wray warned, however, that there may still be explosive packages traveling through the postal system. The FBI director asked the public to be vigilant and contact law enforcement with any related information.

“These terrorizing acts are despicable and have no place in our country,” Trump told attendees of Turning Point USA’s Young Black Leadership Summit during their visit to the White House:

We will prosecute them, him, her, whoever it may be, to the fullest extent of the law. We must never allow political violence to take root in America.

Americans must unify and we must show the world that we are united together in peace and love and harmony as fellow American citizens.

While Trump has condemned political violence several times this week, some in the media suggested that the president has incited violence through his rhetoric, including at rallies and on Twitter.

Some pointed to Trump’s praise last week during a rally for Rep. Greg Gianforte, R-Mont., who physically assaulted a reporter during a special election campaign last year.

“Never wrestle him,” Trump said of Gianforte. “Any guy that can do a body slam, he’s my guy.”

After the suspicious package addressed to Brennan at CNN offices in New York prompted an evacuation Wednesday, CNN Worldwide CEO Jeff Zucker released a statement blaming the incident on the president’s rhetoric.

“There is a total and complete lack of understanding at the White House about the seriousness of their continued attacks on the media,” Zucker said in a statement released on Twitter. “The President, and especially the White House Press Secretary, should understand their words matter.”