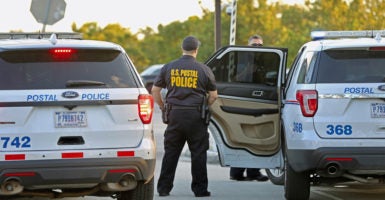 Law enforcement officials on Friday arrested a Florida man identified as Cesar Sayoc Jr. in connection with 12 suspected mail bombs sent to Democratic politicians and other public officials in the past few days.

Sayoc has a criminal history that includes charges for grand theft and felony distribution of steroids, according to public records. In August 2002, he was charged with threatening “to throw, place, project or discharge” a destructive device.

Cesar Sayoc, a Florida man identified as a suspect in the suspicious mail bombings, has a history of arrests, including one for a 2002 bomb threat https://t.co/14ix0zIHeI

None of the devices exploded or reached the intended target, authorities said.

Sayoc, whose race is listed as white in public records, started a business called Native American Catering & Vending in September 2016.

His social media accounts suggest that he claims membership in the Seminole tribe. His biography on a Twitter account Sayoc operated listed him as an events manager at the Seminole Hard Rock casino.

Sayoc is listed on Nexis as a registered Republican.  Photos and video of his white van, parked outside an AutoZone store in nearby Plantation, Florida, showed it covered in what appeared to be pro-Trump stickers.

@CBSMiamiI have some pictures of this van I saw him at a stoplight one day and thought is was very strange. pic.twitter.com/VWUwznJK8k

The FBI moved the van, covered in blue tarp, to a facility in Broward County.

It remained unclear what charges Sayoc will face. A Justice Department spokeswoman declined comment, though the agency planned to hold a press conference Friday afternoon.