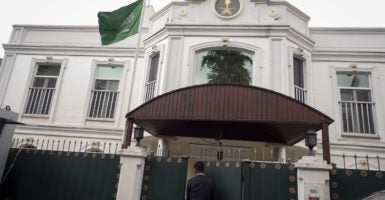 Saudi Arabia’s government has some explaining to do to the United States about a missing Washington Post columnist, foreign policy experts say, but the Trump administration shouldn’t make a rush to judgment.

Jamal Khashoggi, 59, a Saudi journalist and columnist for the Post, was last seen Oct. 2 going into the Saudi Consulate in Istanbul, Turkey.

“If something bad has happened to Khashoggi, it was either a very bad decision by [bin Salman], or someone thought they were acting on behalf of the crown prince, and perhaps went too far,” Matthew Heiman, a senior fellow at the National Security Institute at George Mason University, told The Daily Signal.

“They need to come forward and provide evidence that Khashoggi did not enter the consulate or he left the consulate,” Heiman said. “I would presume there is video to demonstrate who enters and exits the consulate.”

Update: Saudi Arabia issued a warning Sunday to any country considering punishing it for Khashoggi’s disappearance. The kingdom said that “if it receives any action, it will respond with greater action.” The title of the statement said Saudi Arabia “confirms its total rejection of any threats and attempts to undermine it.”

The Trump administration began an investigation at the urging of 20 senators who signed onto a bipartisan letter to the president.

“We’re going to find out what happened with respect to the terrible situation in Turkey having to do with Saudi Arabia and the reporter,” Trump told reporters Friday as he prepared to make a trip to Ohio.

“And nobody knows quite yet. Nobody’s been able to put it all together,” Trump said.

“People are starting to form ideas, and as they’re formed, we’ll let you know. But it’s certainly a terrible thing.”

As of late Friday afternoon, Trump said he hadn’t yet spoken to the Saudi crown prince, but would call him at some point.

The senators’ letter to Trump was initiated by the chairman and ranking member of the Senate Foreign Relations Committee—Sens. Bob Corker, R-Tenn., and Robert Menendez, D-N.J., respectively.

Graham: If Saudi Arabia Killed Jamal Khashoggi, It Will 'Destroy' Relationship With US https://t.co/Ena9bmUHJ6

Under a 2012 law called the Global Magnitsky Human Rights Accountability Act, upon receipt of a letter from the chairman and ranking member of the Senate Foreign Relations Committee, the president must make a determination within 120 days on whether to impose sanctions with respect to a foreign person responsible for extrajudicial killings, torture, or other human rights violations.

The senators’ letter to Trump says in part:

The recent disappearance of Saudi journalist and Washington Post columnist Jamal Khashoggi suggests that he could be a victim of a gross violation of internationally recognized human rights, which includes ‘torture or cruel, inhuman, or degrading treatment or punishment, prolonged detention without charges and trial, causing the disappearance of persons by the abduction and clandestine detention of those persons, and other flagrant denial of the right to life, liberty, or the security of person.’

Therefore, we request that you make a determination on the imposition of sanctions pursuant to the Global Magnitsky Human Rights Accountability Act with respect to any foreign person responsible for such a violation related to Mr. Khashoggi.

The controversy over a journalist vanishing after visiting the Saudi Consulate in Turkey comes as the Saudi crown prince seemed to be moving his country closer to Western values and as Turkish President Recep Tayyip Erdogan has become more authoritarian.

On Friday, after more than two years, Turkey released U.S. pastor Andrew Brunson. The Turkish government arrested Brunson on terrorism and treason charges for trying to spread the Christian faith in the majority-Muslim country.

“Broadly, Mohammed bin Salman is an undemocratic leader, but is making reforms for a more diverse economy, less dependence on oil, expanding rights for women, and rooting out corruption,” Heiman said of the Saudi crown prince.

“That’s what makes this so disjointed and strange. Erdogan has gotten less and less respective of democratic norms of a free press and freedom of religion.”

Even more perplexing is that Khashoggi has not been a radical critic of the Saudi government, said Heiman, who said he fears the case may be akin to Russian President Vladimir Putin’s attacks on journalists.

“This is a guy who has written about Saudi Arabia, but he’s not a bomb-thrower,” Heiman said of Khashoggi. “He’s not threatening the stability of the Saudi regime. If something bad happened to a mild critic of the regime, what would they do to a serious critic? It smacks of Putinism.”

Both the missing journalist and the jailed pastor became major stories because they speak to American values, said James Phillips, senior research fellow for Middle Eastern affairs at The Heritage Foundation.

“The fact that he was a journalist made this a bigger story and a cause for other journalists,” Phillips told The Daily Signal. “Similar to the pastor held in Turkey, freedom of press and religion are key American values we want to promote.”

“Yes, we should stand up for our values, including freedom of the press, freedom of religion, and respect for the rule of law,” Phillips said.

Should Saudi officials be determined to be behind Khashoggi’s disappearance, or refuse to provide information, the United States could stop selling weapons to the country or impose financial sanctions, he said.

“If the Saudis are found to be responsible for an illegal act, they should be held to account,” Phillips said, adding:

The officials responsible should be sanctioned, and if the Saudi government fails to disown and punish them, then Washington should consider stronger measures.

The administration should investigate the matter, but not rush to a verdict without adequate evidence. Almost all the information thus far has come from the Turkish government and pro-government media.

These same sources charge that the U.S. is training ISIS fighters in Syria, so we need to take their allegations with large grains of salt. The U.S. government must do its own investigation to ascertain the facts.

This report was updated to include the statement Sunday from Saudi Arabia.