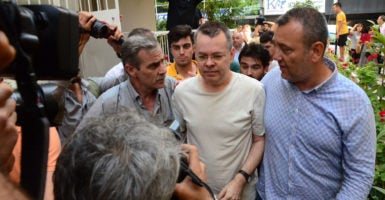 Sarah Roberts is a member of the Young Leaders Program at The Heritage Foundation.

After significant international pressure from the United States and other nations, American pastor Andrew Brunson was finally released from prison to house arrest after a Turkish court ruling last Wednesday.

Brunson, originally from North Carolina, had previously lived with his family in Turkey for 23 years while leading the small Resurrection Church in the coastal city of Izmir.

He was arrested on Oct. 7, 2016, held in harsh prison conditions, and given limited access to his family, legal assistance, and U.S. consulate services. Two months after his arrest, Brunson faced charges of “membership in a terrorist organization” as well as participating in political espionage following the July 2016 coup. If he is found guilty, he could serve up to 35 years in prison.

After attending his court hearing this past May, Sandra Jolley, vice chair of the U.S. Commission on International Religious Freedom, expressed her severe concerns about the existence of any due process for this U.S. citizen.

“Today’s 11 hours of proceedings were dominated by wild conspiracies, tortured logic, and secret witnesses, but no real evidence to speak of. Upon these rests a man’s life,” Jolley said at the time. “Worse still, the judge’s decision at the conclusion of today’s hearing to dismiss all of the witnesses called by Pastor Brunson’s defense without listening to a single minute of their testimony is simply unconscionable.”

The release to house arrest provides hope that Brunson may eventually be released.

But his Turkish lawyer, Ismail Cem Halavurt, explained that Brunson is still not allowed to leave the country.

This case is indicative of broader threats to religious expression in Turkey. The U.S. Commission on International Religious Freedom, whose vice chair, Kristina Arriaga, has spoken forcefully against Brunson’s unjust prison detention, ranks Turkey as a Tier 2 offender of religious freedom. The commission’s 2017 Annual Report explains that “no religious community—including the majority Sunni Muslim community—has full legal status, and all are subject to state controls limiting their rights to maintain places of worship, train clergy, and offer religious education.”

Similarly, the State Department, in its International Religious Freedom Report for 2017, detailed suppression in Turkey by the state created through religious identifications on ID cards, over 50,000 arrests for alleged terror-related activities, and the unjustified seizure of various private religious properties.

At the conference, Vice President Mike Pence said, “If Turkey does not take immediate action to free this man of faith and send him home to America, the United States will impose significant sanctions on Turkey until Pastor Andrew Brunson is free.”

Turkey’s insistence on detaining Brunson has the potential to destabilize important U.S.-Turkish relations. If Turkey hopes to strengthen rather than further undermine relations between the two countries, it should swiftly release Brunson.

Through the ministerial, congressional pressure, and executive influence, the U.S. should continue to raise Brunson’s plight and strongly encourage Erdogan and other countries to stop repressing people of faith.