Russia-Turkey Relations Unlikely to Be Derailed by Shooting of Ambassador 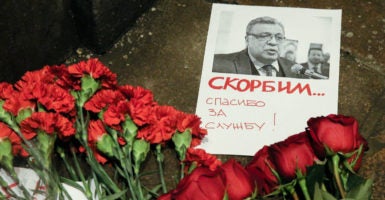 Andrei Karlov, the Russian ambassador to Turkey, was assassinated by a terrorist on Monday while speaking at an art exhibition in Ankara, Turkey. (Photo: Serebryakov Dmitry /Zuma Press/Newscom)

The shocking assassination of the Russian ambassador to Turkey at an Ankara art exhibition on Monday by a Turk seemingly motivated by the situation in neighboring Syria clearly will not help stabilize a region that is rife with trouble—especially since it involves two of Eurasia’s key players.

Ties between Russia and Turkey were already both tenuous and tense prior to this incident.

For instance, Moscow and Ankara back different sides in the ongoing Syrian civil war that has already claimed some 400,000 to 500,000 lives. The Turks want to depose Syrian dictator Bashar al-Assad, while the Russians want to preserve the Assad regime, a longtime Moscow ally.

This difference over Assad arguably came to a head when Turkish fighters downed a Russian war plane that had crossed into Ankara’s airspace last fall, following Moscow’s military intervention into the Syrian conflict.

But clearly interested in keeping the door open to better relations with Ankara, Moscow’s response to the shoot down was quite measured, mostly limited to discouraging Russian tourists from traveling to Turkey and banning Turkish food imports.

Indeed, Russo-Turkish relations have rebounded from this low since then, including beginning talks on Syria, having mutual concerns about Islamist terrorism, and agreeing to organize an evacuation of civilians from the besieged Syrian city of Aleppo.

So, despite this latest tragic incident in bilateral ties, Russia and Turkey have strong, self-perceived interests in developing and maintaining solid relations with one another.

Russia, for its part, is looking for opportunities to weaken the North Atlantic Treaty Organization, of which Turkey is a key member. Turkey holds down the security organization’s southeastern flank, hosts U.S. forces, and sits astride the strategic Turkish Straits through which Russia’s Black Sea Fleet sails into the Mediterranean Sea.

Turkey is also looking for other partners to balance unsettled ties with Europe and the United States, which have been strained over the war in Syria and an attempted coup against Turkish President Recep Tayyip Erdogan this summer.

Given increasing concerns in the West over Russian global assertiveness, playing the Moscow card gives Ankara leverage to a certain extent with both Europe and the United States on issues it cares about—not to mention in the Middle East.

It is due to these circumstances that Moscow and Ankara will likely find ways to push through this latest crisis in their bilateral relations. Indeed, Russia, Iran, and Turkey opted to go ahead and reportedly will hold talks on Syria today in Moscow.