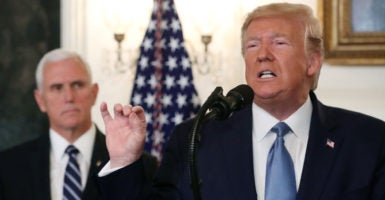 President Donald Trump announced what he called a “permanent” cease-fire between Turkey and the Kurds, as well as the lifting of U.S. sanctions on Turkey.

Trump also reiterated his desire to get the United States out of Middle East wars.

“Let someone else fight over this long-bloodstained sand,” he said during White House remarks shortly before noon Wednesday.

Vice President Mike Pence and Secretary of State Mike Pompeo last week negotiated a temporary cease-fire between the Turks and the Kurds in northeastern Syria that expired Tuesday.

In his remarks, Trump said:

Early this morning, the government of Turkey informed my administration that they would be stopping combat and their offensive in Syria and making the cease-fire permanent—and it will be permanent. However, you would also define the word permanent in that part of the world as somewhat questionable, we all understand that. But I do believe it will be permanent.

After Trump announced withdrawal of all U.S. troops from Syria on Oct. 12, Turkey forces attacked northeastern Syria, including the Kurds, who have been U.S. allies in the battle to defeat the Islamic State, the terrorist army also known as ISIS.

The Trump administration then imposed economic sanctions on Turkey. The president said Wednesday that he had instructed Treasury Secretary Steven Mnuchin to lift the sanctions.

Trump said a “small number” of U.S. troops will remain in the area to protect oil fields.

“So the sanctions will be lifted, unless something happens that we’re not happy with,” Trump said. “This was an outcome created by us, the United States, and nobody else, no other nation, very simple. We’re willing to take blame and we’re willing to take credit.”

Pence, Pompeo, and national security adviser Robert O’Brien joined the president for the announcement. Pence had suggested the development in remarks Tuesday night at a gala dinner held by The Heritage Foundation.

Trump said Mazloum Abdi, commander of the Kurdish Syrian defense forces, was “extremely thankful for what the United States has done—could not have been more thankful.”

He said of Turkish President Recep Tayyip Erdogan that “in his mind, [he] is doing the right thing for his country.”

“Countless lives are now being saved as a result of our negotiations with Turkey, an outcome reached without spilling one drop of American blood. No injuries, nobody shot, nobody killed,” Trump said.

Sen. Lindsey Graham, R-S.C., often a Trump ally, had been extremely critical of the president’s decision to withdraw from Syria. However, after the announcement Wednesday, Graham seemed more encouraged.

“If we can create a sustainable Safe Zone—that protects Turkey’s national security interests and prevents the ethnic cleansing of our Kurdish allies—that will be historic progress,” Graham said in a formal statement. “It is important that the international community police this Safe Zone—not Assad, not Russia, not Turkey. This can be accomplished by America providing air power to an international force, but not committing troops on the ground to control the Safe Zone.”

Graham, a member of the Foreign Relations Committee, also said that keeping a U.S. presence to protect oil fields from falling to Syrian dictator Bashar Assad, the governments of Iran and Russia, as well as terrorists in the region also are key.

“By continuing to maintain control of the oil fields in Syria, we will deny Assad and Iran a monetary windfall,” the South Carolina Republican said in the written statement. “By increasing production of the oil fields, we will be helping our Syrian Democratic Forces (SDF) allies who fought so bravely to destroy the ISIS Caliphate. We can also use some of the revenues from future oil sales to pay for our military commitment in Syria.”