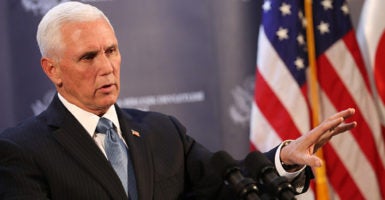 "Whatever the Democrats and their allies in the media want to spend their time on in the next year, President Trump and I are going to keep focusing on the issues," Vice President Mike Pence tells a Heritage Foundation audience Tuesday night. Pictured: Pence at a press conference Thursday after his meeting with Turkish President Recep Tayyip Erdogan in Ankara, Turkey. (Photo: Adem Altan/AFP/Getty Images)

Vice President Mike Pence expressed hope Tuesday night for a “permanent” cease-fire between Turkey and the Kurds after the five-day pause in hostilities in northeastern Syria that he helped negotiate last week.

“Earlier today, we received word from the Syrian defense forces commander that all of their military forces have been pulled from the safe zone under Turkish military control,” Pence said, referring to Kurdish fighters in remarks to an audience of about 1,500 at a gala dinner hosted by The Heritage Foundation in Washington.

“Before I came here, our team was continuing in communications with both sides about a permanent cease-fire. Those discussions are ongoing,” the vice president said.

Later, Pence addressed the impeachment drumbeat, saying: “Whatever the Democrats and their allies in the media want to spend their time on in the next year, President Trump and I are going to keep focusing on the issues.”

Pence’s remarks on domestic politics as well as the latest developments in northeastern Syria came during his keynote address for the Heritage Honors gala that capped the leading think tank’s annual President’s Club meeting. The gathering brings together Heritage supporters to network and hear from leaders in the conservative movement, including lawmakers, policy experts, and commentators.

Pence and Secretary of State Mike Pompeo traveled Thursday to Turkey, where they met with Turkish President Recep Tayyip Erdogan before announcing the 120-hour cease-fire agreement.

However, many critics from both parties have criticized the agreement as not effective and expressed concern that President Donald Trump had abandoned the Kurds to Turkey by pulling out U.S. troops.

Pence said the temporary cease-fire has held and he is hopeful.

“We may well give the international community the opportunity to establish a safe zone between Turkey and the Kurdish population in Syria that will ensure peace and security,” Pence said.

“In the midst of all of this, our troops are coming home,” he said.

Pence noted that under the Trump administration, U.S. soldiers fought with Kurdish allies to defeat fighters with the Islamic State, the terrorist army also known as ISIS.

“America will always be grateful for our Kurdish allies who fought shoulder to shoulder in bravery with us,” the vice president said. “Now that our military and allies have achieved our objectives against ISIS, President Trump is keeping his word to the American people. Our troops have started to come home.”

After the U.S. began the withdrawal, however, Turkish forces invaded the Kurdish areas of Syria.

“He called on Turkey to stand down,” Pence said of Trump. “Last week,  Secretary of State Mike Pompeo and I traveled to Turkey and secured a cease-fire agreement to allow our Kurdish allies in the Syrian defense forces to safely withdraw from the areas under Turkish military control.”

Pence also touted the economic successes of the Trump administration, citing the lowest unemployment rate in 50 years; protections for the unborn and conscience rights; progress in securing the border; and a strong record of appointing conservative judges.

But, bringing up House Democrats’ impeachment probe, Pence said the administration would continue to focus on national defense and “jobs, jobs, jobs.”