‘This Innocent Man of Faith Will Soon Be Home!’: Turkey Releases Jailed Pastor 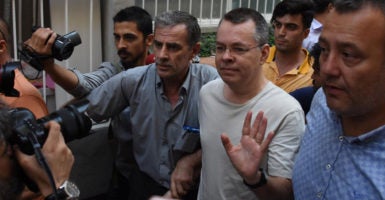 Pastor Andrew Brunson reacts as he arrives at his home after being released from the prison in Izmir, Turkey, on July 25. (Photo: Stringer/Reuters/Newscom)

An American pastor who was held for two years in Turkey for alleged terror and treason charges was released Friday.

“Pastor Andrew Brunson is coming home! Thanks to the strong leadership of [President Donald] Trump and the steadfast prayers of millions of Americans, this innocent man of faith will soon be home!” tweeted Vice President Mike Pence.

Pastor Andrew Brunson is coming home! Thanks to the strong leadership of @POTUS Trump and the steadfast prayers of millions of Americans, this innocent man of faith will soon be home!

“The Turkish court basically significantly reduced Pastor [Andrew] Brunson’s sentence and lifted an exit ban that had been imposed on him,” said Weber, who witnessed Brunson’s hearing and called into the phone conference from Turkey.

“He was on house arrest after being in jail for awhile and that house arrest ban has basically been lifted because the exit ban that had prevented him from leaving the country has been lifted.”

Witnessing the hearing in Pastor Brunson’s case today in Turkey was emotional. Glaring problems with the prosecution’s evidence set the stage for a reduced sentence and lifting of the exit ban. Thankful for the Trump administration's resolve fighting for his release. Praise God! https://t.co/4RyEvbTpSk

Brunson served time in prison and was subsequently put on house arrest in Turkey after being arrested in 2016 on terror and treason charges, Fox News reported.

Brunson denied charges, saying at the hearing that he is “an innocent man,” and “I love Jesus. I love Turkey.”

“Pastor Andrew Brunson’s release by Turkey’s government is a welcome but long overdue action,” says James Phillips, senior research fellow for Middle Eastern affairs at The Heritage Foundation. “Brunson was held on false and absurd charges that he supported a failed 2016 coup against the Turkish government and supported the Kurdistan Workers’ Party, which has been designated as a terrorist group by Turkey, the United States, and the European Union.”

Tony Perkins, president of the Family Research Council, who attended Brunson’s hearing in Izmir, Turkey, also praised the Trump administration in a statement.

“The prayers of thousands were answered today when Pastor Brunson was released by the Turkish government and told he could go home to the United States,” Perkins, a commissioner on the U.S. Commission on International Religious Freedom, said.

“Those prayers combined with the unwavering resolve of President Trump, Vice President Pence, Secretary [of State Mike] Pompeo and Ambassador [Sam] Brownback brought tangible help to Pastor Brunson and hope to those around the globe who are being persecuted because of their faith,” he added.

My thoughts and prayers are with Pastor Brunson, and we hope to have him safely back home soon!

Brunson, 50, is from North Carolina and pastored an evangelical church in Izmir prior to his arrest.