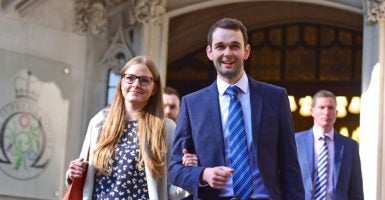 The U.K. Supreme Court unanimously ruled that Daniel and Amy McArthur did not discriminate against gay rights activist Gareth Lee on the ground of sexual orientation. (Photo: Victoria Jones/Zuma Press/Newscom)

Earlier this year, Christian cake artist Jack Phillips won a resounding 7-2 victory at the Supreme Court against those who tried to force him to custom design a cake for a same-sex wedding, against his religious beliefs.

A similar case has just played out across the pond, and the victory for religious liberty is equally resounding.

On Wednesday, the  Supreme Court of the United Kingdom delivered a unanimous 5-0 ruling in favor of Ashers Baking Company and its Christian owners, the McArthur family, restoring their freedom of speech.

The court overturned two previous rulings that had penalized the bakery for declining to create a cake bearing the message “Support Gay Marriage.”

The cake was originally requested in 2014 by Gareth Lee, a member of a local LGBT advocacy group called QueerSpace. The cake was to feature the slogan “Support Gay Marriage” along with an image of “Sesame Street” characters Bert and Ernie. The McArthurs politely declined the request because they could not in good conscience print that message, due to their deeply held faith.

As Christians, the McArthur family gives its faith top billing. They’re closed for business on Sundays, for example, forgoing income on a busy day in order to observe the Sabbath. Even the name of their bakery, Ashers, is pulled from a biblical reference to the Israelite tribe of Asher. In the Old Testament, Jacob prophesies that the food from Asher’s tribe would be “fit for a king.”

Make no mistake, the McArthurs are happy to create cakes for anyone. They had served Lee before, and were happy to do so again. What they couldn’t do is express a message that contradicted their faith. That’s why on several occasions, the family has declined to create cakes featuring nudity and profanity.

So, when Lee requested the pro-same-sex marriage cake in 2014, the McArthurs’ decision may not have been easy, but it wasn’t complicated. Marriage, in the McArthurs’ biblical view—and notably, as the government of Northern Ireland currently recognizes—is between one man and one woman.

Days later, Lee was able to have the cake order fulfilled at another bakery. Weeks later, Lee filed a complaint with a government agency known as the Equality Commission for Northern Ireland, which brought proceedings against the McArthurs and Ashers Baking Co. for discrimination on the grounds of sexual orientation and political opinion.

In its ruling Wednesday, the U.K. Supreme Court made clear that the McArthurs had not discriminated against Lee, and were fully entitled to decline to express the requested message on the basis of the beliefs that guide them in all aspects of life.

Lady Brenda Hale, delivering the judgment of the court, said:

It is, of course, the case that businesses offering services to the public are not entitled to discriminate on certain grounds. The bakery could not refuse to provide a cake—or any other of their products—to Lee because he was a gay man or because he supported gay marriage. But that important fact does not amount to a justification for something completely different—obliging them to supply a cake iced with a message with which they profoundly disagreed.

While the ruling is great news first and foremost to U.K. citizens—including renowned LGBT advocate Peter Tatchell, who publicly supported the McArthurs’ freedom in the last stages of the case—it’s also a reminder to free people everywhere that vigilance is the cost of keeping liberty alive.

That reality was underscored in the Equality Commission for Northern Ireland’s response to Wednesday’s ruling, in which the taxpayer-funded agency expressed its disappointment in the ruling. The Colorado Civil Rights Commission expressed similar disappointment after the U.S. Supreme Court found it had mistreated Masterpiece Cakeshop owner Jack Phillips.

In Phillips’ case, it took the state of Colorado less than a month following the Supreme Court ruling to launch its second targeted crusade against Masterpiece Cakeshop—this time for declining a request for a pink and blue cake celebrating a lawyer’s gender transition.

Courts and government officials in the U.S. and the U.K. would do well to follow the example set by the U.K. Supreme Court in the Ashers case, where freedom triumphed over forced promotion and involuntary participation.

As societies that value freedom, those on either side of the Atlantic should take a minute to be thankful for Wednesday’s decision. Then, we must rededicate ourselves to vigilant, winsome advocacy to defend and extend freedom to people from all walks of life.