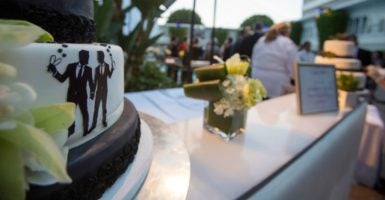 In February 2016, Edie and David Delorme received death threats after declining to make a cake for a same-sex wedding. (Photo: Mario Anzuoni/Reuters /Newscom)

Hostility toward religion is on the rise in the United States, according to a new report.

The report, recently released by the Family Research Council, shows an increase in the number of incidents involving “religious freedom violations” since the first report was released in July 2014. The original report spanned over a decade and contained 90 incidents. In the past three years, 69 new incidents have been added.

“The recent spike in government-driven religious hostility is sadly not surprising, especially considering the Obama administration’s antagonism toward biblical Christianity,” said Tony Perkins, president of the Family Research Council, in a statement. “The report underscores the legitimacy of the actions taken by the Trump administration to end the policies and practices in federal agencies that fan the flames of this religious intolerance.”

Perkins added the report’s findings also show “the growing courage of Christians, especially young Christians, to defend both their faith and their freedoms.”

The report found that antagonism toward religious beliefs on sexuality was fueling much of the increase:

Hostility to religious beliefs on natural marriage and human sexuality … [included] 42 incidents in the report’s first edition. In the time since then, 48 new incidents have been added to these sections. Thus, the number of these religious freedom violations more than doubled …

In the introduction to the report, the Family Research Council writes that the attacks on religious teaching on marriage and sexuality “is the product of more insidious forces which ultimately will erode civil liberties for all Americans, even if they hold a different viewpoint than our own.”

Included in the religious liberty violations listed in the report was one about a survey distributed by a major financial firm.

In 2014, JPMorgan Chase, a vocal advocate of LGBT rights, sent out a survey to its employees asking a number of questions. The survey asked if the employee was “disabled, had family members that were disabled, if they were LGBT, or if they were allies of the LGBT movement.” Employees that answered negatively the final question could be interpreted as being at odds with the beliefs of the firm.

In February 2016, Edie and David Delorme received death threats after declining to make a cake for a same-sex wedding. The Delormes, who are devout Baptists, have previously refused to create cakes that go against their religious convictions, including those “that support alcohol, tobacco, gambling, or convey sexually inappropriate images,” according to the report.

Rather than accepting a list of nearby bakeries that would create the same-sex wedding cake instead, the couple complained to the media, bringing on harsh attacks against the Delormes.

“The bakery received threats of violence on social media and Yelp,” the Family Research Council wrote. “Though the bakery was never threatened with a lawsuit, they remain a target of criticism by LGBT activists.”

Another area of extreme hostility concerns Catholic churches, schools, and hospitals who have been operating in accordance with the Catholic Church’s teaching.

One example occurred in September 2016 when Kate Drumgoole, a guidance counselor and coach at a Catholic high school in New Jersey, was fired when the administration learned that she was in a same-sex relationship.

Drumgoole, citing discrimination, sued the archdiocese and Paramus Catholic High School despite having previously signed the archdiocese’s “Policies on Professional and Ministerial Conduct.” By signing it, teachers acknowledge the requirement that they “act in accordance with the ‘discipline, norms and teachings of the Catholic Church.’”

“Religious liberty is the exercise of our inherent, natural rights. It is not limited to freedom to worship, rather, it means that we are free to live consistently with our beliefs in the public square,” says Melanie Israel, a research associate in the DeVos Center for Religion and Civil Society at The Heritage Foundation.

“Individuals and organizations should be able to maintain their ability to abide by their religious convictions when they carry out their work, including serving the poor, educating the next generation, or running a business.”