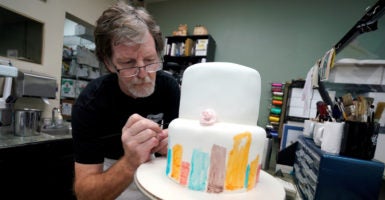 “The state is doubling down on its hostility against my beliefs, even though that’s what the Supreme Court said they couldn’t do,” says cake artist Jack Phillips, pictured Sept. 21 working on a custom cake in his Masterpiece Cakeshop in Lakewood, Colorado. (Photo: Rick Wilking/Reuters/Newscom)

The Colorado Civil Rights Commission is going after Christian baker Jack Phillips again, although the Masterpiece Cakeshop owner won a resounding 7-2 decision in June before the U.S. Supreme Court.

The state commission moved against Phillips after a lawyer asked him to design and bake a custom cake celebrating a gender transition, pink on the inside and blue on the outside.

Phillips, who calls himself a cake artist, said the requested cake’s message would violate his religious beliefs.

“The state is doubling down on its hostility against my beliefs, even though that’s what the Supreme Court said they couldn’t do,” Phillips said in a prepared statement released by his lawyers. “It seems I’m the only person in the state of Colorado who can’t live out my beliefs.”

The religious liberty group Alliance Defending Freedom, which has represented Phillips since he turned down a gay couple’s order six years ago for a cake celebrating their marriage, also represents him in a federal lawsuit filed late Tuesday to challenge the latest state action against him.

Shortly after its Supreme Court loss, the state Civil Rights Commission informed Phillips that it found probable cause to believe that Colorado law requires his bakery in Lakewood to create the requested gender-transition cake.

“I serve all customers,” Phillips said once again in his formal statement. “I simply decline to create custom cakes that express messages or celebrate events in violation of my deeply held beliefs.”

According to Alliance Defending Freedom, a lawyer identified as Autumn Scardina asked Masterpiece Cakeshop to bake the gender-transition cake on June 26, 2017. That was the same day the Supreme Court agreed to hear Masterpiece Cakeshop v. Colorado Civil Rights Commission, the case involving the wedding cake.

“We told him we’d sell him anything in the shop, but we could not create that cake because of the message it conveyed,” Phillips said of the lawyer’s request for the pink and blue cake.

Justice Anthony Kennedy, in an opinion joined by four conservative justices and two liberal justices, ruled nearly a year later, on June 4, that the Civil Rights Commission showed “hostility” toward Phillips and his faith in deciding he had violated state anti-discrimination law by declining to create the cake marking the same-sex marriage.

“It’s clear that the state of Colorado did not get the message from the Supreme Court, since it is still singling out Jack for punishment and showing hostility toward his religious beliefs,” Kristen Waggoner, senior vice president for Alliance Defending Freedom, said in a formal statement.

>>> Related: Baker Hopes to Create ‘Without Fear of Punishment From Government’

Scardina, the lawyer who requested the cake celebrating a gender transition, is not a defendant in Phillips’ lawsuit. The baker is suing the state commission’s members in their official capacities, as well as suing its director personally.

“In moving ahead on this new complaint, the government is yet again confirming that it applies its law in an arbitrary and unequal way, which the Supreme Court has already said that it cannot do,” Waggoner, who argued Phillips’ case Dec. 5 before the high court, said.

“Jack and other creative professionals should not be targeted by the government for living consistently with their religious beliefs,” she said.

As a policy, Phillips’ lawyers note, Masterpiece Cakeshop also does not make custom cakes that celebrate Halloween; that center on alcohol or drug abuse or sexual themes; or that convey disparaging messages, including those targeting lesbian, gay, bisexual, and transgender individuals or others in the LGBT movement.

The Bible tells us God created us male and female, and I believe that. A gender-transition cake is not something I’ve ever made, and it’s not an event I could celebrate. There are plenty of messages I won’t convey on a cake. I’ve turned down requests to make anti-American cakes, cakes disparaging the LGBT community, as well as those glorifying drug and alcohol use, mistreatment of women, divorce, and more.

In the case Phillips won before the Supreme Court, his lawyers stress, the state of Colorado admitted that cake artists are free to decline to create custom cakes with a “specific design,” including wedding cakes with “a symbol of gay pride,” cakes that contain “pro-gay designs or inscriptions,” or cakes with images opposing same-sex marriage.

The state has not found probable cause when other bakers refused to create custom cakes, including those opposing same-sex weddings.

“The arbitrary basis on which the commission is applying the law makes it clear that they are simply targeting Jack because they don’t like his religious beliefs,” Waggoner said. “Jack shouldn’t have to fear government hostility when he opens his shop for business each day. We’re asking the court to put a stop to that.”

This report has been updated to include the name of the lawyer who requested the “gender transition” cake.