Exclusive: Christian Baker Hopes to Create Without ‘Fear of Punishment From the Government’ 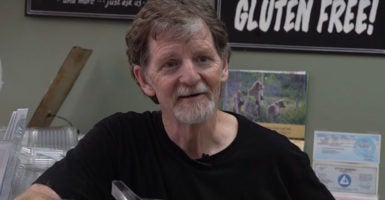 “To me, this was a big win. It was complete. The court addressed everything we asked them to,” Jack Phillips says of the Supreme Court's 7-2 ruling. (Photo: The Daily Signal)

Colorado baker Jack Phillips can’t wait to resume his custom wedding cake business now that the Supreme Court has ruled in favor of his religious freedom.

“I’m just hoping to get back to that as soon as we can,” Phillips said Tuesday in a telephone interview with The Daily Signal.

“We just have to look at the court’s ruling and see what it looks like, and how that’s going to define what we do.”

In its 7-2 ruling issued Monday, the Supreme Court said a Colorado civil rights panel was openly “hostile” to Phillips’ religious belief that marriage is between a man and a woman and to his decision six years ago, based on that belief, to decline to design a cake celebrating the marriage of two men. In doing so, the state violated Phillips’ constitutional right to the free exercise of religion, the court said.

“It allows creative professionals like myself to live and work freely, according to our conscience, without fear of punishment from government—even when the government attacks are as egregious as they were against my faith,” Phillips, 62, said of the decision.

“To me, this was a big win. It was complete. The court addressed everything we asked them to.”

The self-described “cake artist” came to public attention in July 2012, when he declined to design and make a wedding cake for Charlie Craig and David Mullins for a local celebration of the men’s marriage in Massachusetts. He offered to make or sell them anything else.

Phillips was represented before the high court by Kristen Waggoner, senior counsel at Alliance Defending Freedom, a prominent Christian legal aid organization. Waggoner joined him on the phone interview with The Daily Signal.

Phillips had stopped making all wedding cakes, taking a huge hit to his business, after the Colorado Civil Rights Commission found that he had violated state law by discriminating against the gay couple, instructing Phillips to take orders for wedding cakes from all comers.

In the majority opinion, written by Justice Anthony Kennedy, the Supreme Court found that the state commission failed to act with neutrality toward Phillips’ religious beliefs.

At one point, a commissioner compared Phillips’ scriptural views to those held by American slave owners or the Nazis who carried out the Holocaust.

>>> Related:  Meet the Lawyer Who Argued at Supreme Court for Jack Phillips’ Right to Free Speech

The Supreme Court justices did not go on to directly address the entirety of the larger argument by Phillips’ lawyers that the government unconstitutionally sought to compel him to express a view with which he disagreed.

Two of the court’s four most liberal justices, Ruth Bader Ginsburg and Sonia Sotomayor, dissented from the majority ruling.

Phillips, who describes himself as a follower of Jesus Christ, doesn’t just make and decorate cakes and other baked goods. As The Daily Signal previously has reported, he applies his artistic gifts to custom creations, sketching and finalizing designs in consultation with brides and other customers, then painstakingly executing the design, much like a painter would on canvas.

As an evangelical Christian, however, Phillips doesn’t take orders for “messages” that he believes run counter to his faith, including themes involving the occult, sexual explicitness, hate, divorce, and anti-Americanism.

Waggoner, who argued the case before the high court on Dec. 5, told The Daily Signal that the ruling reversing the decision in Colorado is a strong one and shouldn’t be minimized as confined to how the state treated Phillips:

It’s important to point out that, as you know, there’s a constitutional principle that the court only addresses the issues it needs to, to resolve the case. Here, the court found bias, and the hostility [from the Colorado Civil Rights Commission] was so obvious and egregious, it didn’t need to reach any of our other arguments. It found simply that that type of hostility, that level of hostility, has no place in a pluralistic society. …

There was no argument made by us that the court rejected yesterday. And, in fact, it reaffirmed that, as it said in the Obergefell decision [on same-sex marriage] … no one can be banished from the marketplace because the government disagrees with their views on marriage.

The court’s decision was very clear on one thing, and that is that the government can’t apply the law in an unfair way. The commission can’t take the position that cake designers who support same-sex marriage have First Amendment rights, but those who oppose it do not.

The commission, in another ruling, found no wrongdoing by three other Colorado bakers who turned down orders to design cakes opposing same-sex marriage, which each of them support.

Phillips says he hopes the Supreme Court ruling brings to a close six years of death threats, having to cut his staff by nearly half, the loss of about 40 percent of his income, and the commission’s ordered “retraining” of employees, including his mother and daughter.

“We’ve had customers that have been coming in for years, and have looked forward to being able to do their wedding cakes,” Phillips said. “And for the government to take that away from me—hopefully, now that will be behind us, and we’ll move forward.”

“That’s why I got in the business, started out, so that I could create cakes for weddings that are so important in our culture and in my life,” he said. “To be able to sit down and use my artistic talents and draw and sketch and paint, talk with the brides and design cakes … the way they want them to be.”

Did he learn something about his faith over the years?

“I did,” he said. “I don’t know how to put it into words, but my faith is much stronger, and our family is much stronger together. And we’ve all been working together, hoping for this decision to come out this way.”

His faith didn’t waver as the case made its way to the nation’s highest court, Phillips said.

“It never has, honestly. I serve everyone who comes in the shop. I treat everyone with respect. There are just messages I can’t create with cakes. And now I can, hopefully, go about and do that again and not have fear of punishment from the government.”

Phillips got the good news of the Supreme Court’s ruling Monday morning as it was reported online.

“I was in my bakery, sitting in front of my computer watching SCOTUSblog,” he said, referring to the website that covers and analyzes all Supreme Court decisions in real time. “I had no idea [the decision was coming]. I thought I might as well check. I was stunned and thrilled to see it come across that they had a decision in my case.

“Within minutes, I was getting phone calls, [with] people so happy to see that we can get back to doing what we do, making wedding cakes, hopefully,” he said.

“We’re optimistic,” Waggoner added, “and believe that Jack will be returning to designing these custom wedding cakes very soon, and that the commission is going to have to stop being so hostile to people of faith like Jack.”

After news broke of the decision in Masterpiece Cakeshop v. Colorado Civil Rights Commission, things got a bit crazy, Phillips said. Waggoner and his other lawyers with Alliance Defending Freedom studied the majority opinion and prepared to talk about it and the concurring and dissenting opinions with the public and news media.

“The court ruled completely accurately and recognized that the attack from the state government on my religious beliefs was totally wrong,” Phillips said. “We should all be encouraged by that.”

Phillips and Waggoner spoke with The Daily Signal from New York City, where they had traveled Monday for appearances Tuesday on such TV shows as “Fox & Friends” on the Fox News Channel and “Varney & Co.” on the Fox Business Network.

How will the cake artist and his family celebrate?

“Yesterday was quite a chaotic day,” he said, “so when we get back, we’ll get together and we’ll do something. I don’t know what yet.”

No word on whether Phillips has a custom cake in mind for the occasion.

>>> Related: 24 Questions for Jack Phillips, the Baker Who Gave Up Wedding Cakes for God